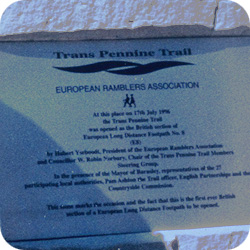 The Trans Pennine Trail and the E8: The Trans Pennine Trail is part of European Long Distance Footpath E8, which is a route being developed across 10 European Countries, including Britain. The E8 is already available for walkers in Ireland, UK, the Netherlands, Germany, Austria, Slovakia, Poland and part of Bulgaria. Currently the E8 ends at the Poland/Ukraine border.

The European Ramblers Association identified the walking route of the Trans Pennine Trail as the British leg of the E8. Daily sailing’s between the King George Dock in Hull and Rotterdam by North Sea Ferries form a vital link between the mainland sections of the route. From Liverpool, the Dublin ferry makes Ireland accessible for walkers, where the E8 route from Dublin to Kerry, follows the Wicklow Way.

The Trans Pennine Trail was the first designated E route in Britain, when it was officially opened as part of the E8 in July 1996. The TPT is the only section of the E8 that is for multi-user (walkers, cyclists and horse riders). The rest of the E8 route on Continental Europe is for walkers only.

Walkers can take up the E8 route in Europe from Rotterdam. The route then passes through the Netherlands, crossing into Germany to Bonn, through the Rhine Valley. It then crosses north Austria and rejoins the Danube from Vienna to the border of Slovakia. Here the route rises through the mountains and leaves through the Dukla Pass, passing through the southern tip of Poland into the Ukraine. It will then travel south through Romania and Bulgaria. It is hoped that it will eventually continue through Turkey on to Istanbul, on the Bosporus, but there is no set timescale for this at the moment.

Further Information: The best source of information on the E8 and other European routes is the European Rambler Association website. This gives information on the various guides and maps to different sections of the route. The Trans Pennine Trail Office in Barnsley does not publish a guide to the rest of the E8 in Europe. An outline map of the route is also available on the ERA website.

The Trans Pennine trail is not responsible for content of external websites.

Overview map of the TPT for walkers.

Here is a list of Accessible Venues across TPT