Vikings on the Trans Pennine Trail 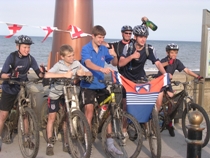