Doing this cross England trail over 14 days staying at B&B's, is the most therapeutic, and one of the most challenging things I have ever done alone. Starting at Southport, having travelled by train from Flixton in Manchester, I made pre-arranged overnight stops at Aintree, Hale Village, Lymm (home), Stockport, Hadfield, Penistone, Elsecar, Doncaster, Strand, Selby, Howden, Brantingham, Hull, and a final overnight stop in Hornsea before returning home using my bus pass back to Hull, and train to Manchester.

Although the trail covers between 207 en 215 miles depending on alternative paths, I managed to walk somewhere between 130 en 150 miles because:- 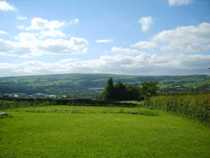 I made a mistake in starting wearing trainers, thinking they would be lighter than my walking shoes. These are fine for level walking for about 10 mijlen, but not sustained slogs over sharp gravel/rough ground. As I averaged 17 miles over the first three days (52 mijl totaal) my feet were in a very bad way. However I am stubborn and refused to pack it in, and as I was due to spend night 3 at home (my wife picked me up and dropped me back at the same place near home) I phoned ahead to tell her about the feet. She went out and bought sterile dressings, surgical pads, foam inserts, plasters, and white spirit. On the 4th day I changed to my proper walking shoes, but the damage was done so I had to restrict the mileage for the following few days whilst the feet recovered, using my free pensioners national travel pass to complete some of the stages, and accepting I could not walk every step of the way. A bit of patience was necessary whilst the blisters/stripped skin healed, to avoid straining muscles whilst walking abnormally. After a few days the feet recovered sufficiently to walk on the ball of the foot so I was back to walking full distances.

If my wife had not got the medication I don&#8217;t think I would have made it. 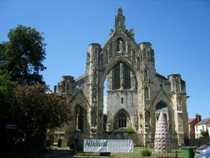 One problem section of the journey was the Hadfield to Penistone leg over Woodhead, as my feet had not fully recovered, there are no intermediate stopping places, and it is approximately 16 mijlen. When I enquired about public transport, I found there wasn&#8217;t any, and hadn&#8217;t been since the old railway had been lifted. The owner of the stopover kindly offered to run me over in his car if I paid for his petrol, which I gratefully accepted. This also enabled me to slip in to Yorkshire unnoticed without a visa!!

I passed an old man sat outside his village cottage on the Yorkshire Wolds (can&#8217;t remember which village) who passed the time of day and offered to make me a cup of tea.

A little later the conditions were so perfect I felt in a perfect state of bliss so I phoned both an ex-colleague and my daughter at work from the middle of the Yorkshire Wolds to tell them life did not get better – a day of clear blue sky, a skylark above, and the only other sound was the wind passing over the landscape. After a short silence the ex colleague said, &#8216;Have you got a woman with you!!?

Apart from a couple of days I was blessed with dry weather, with ideal temperatures for walking. For most of the route the scenery is good, but there are some legs that pass through Industrial Estates as at Aintree, and the approach to Hull passes through what is now a derelict fenced off dock area – not the sort of place you would choose to be at night. At Aintree, I started walking the wrong way along the loop line, only realising when I saw the racecourse on my left, and having to backtrack about 1.5 mijlen, thus adding a total of about 3 miles to my day&#8217;s walking.

I took photographs on the way as I am sure many have done before. Echter, as an amateur painter I have done two paintings from the photos taken on the walk. If any reader is interested, they can be viewed on my website. Under &#8216;buildings’ one is of the cottage I stayed in at Brantingham. I have since sent the original to the owners. The other is under &#8216;landscapes’ and depicts the route of the old Liverpool loop line. The website address is :- http://myweb.tiscali.co.uk/normanswatercolours

Alternatief, as it is a long address, the easy way is to google &#8216;norman booth paintings’ and it is listed at the top. 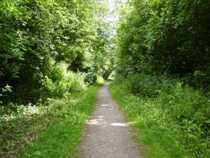 My only regret is I could not walk the entire way for the reasons given. What a fantastic experience though, very enjoyable, and I found a few things out about myself. On Day one I sat on a bench at Altcar Moss to put waterproofs on in heavy rain, but due to the weight of my rucksack, which I had not taken off, overbalanced and did a backward somersault in to a very wet bed of nettles. &#8216;Deary me&#8217;, I said. The important thing is I quickly saw the funny side, laughed, and thought what a great video it would have made! Thinking back, I probably lost some loose change out of my pocket when I fell, so if you are passing that bench and find it you are welcome to it!

I carried a small pocket sized notebook to list things of interest, such as the old WW2 airfield at Burn, so that I could look up the details/history once I returned home. As I was committed to pre-booked stopovers, there wasn&#8217;t always time to stay as long as I would have liked at some of the places on the route, but these can always be revisited later at leisure by car.