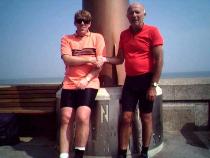 I live quite near to the TPT and have done various local bits on foot and on my bike, on my own, with my mates and with my wife, but one summer I decided to do it – or at least half of it on my bike with my colleague from work. We had both done a bit of biking and walking but I personally had done nothing major like a long trek.

The first part was from Oxspring to Hornsea in 3 days.

Day one we were dropped off in Oxspring and were soon going at break neck speed descending down to Worsbrough, cup of tea and bacon sandwich at the farm there. Onwards to Spot borough, pre the floods and mistake number one- a good lunch but a pint! Further on the Bentley and a couple more, but enjoying the ride and met up with a German cyclist, obviously new to the trail. He was going in the westerly direction, this was Sykehouse and he was asking if he could get to Liverpool that night!!!

Talking of Sykehouse, two more pints there and arrived in Snaith to stay at the Brewers Arms. The excesses of the day took their toll and our intended good night in the bar resulted in being shattered and an early bed.

Day two saw a couple of bleary eyed guys crawl out of bed and pedal off east not feeling 100%. We avoided Selby to save time and made it on the main road to Howden to pick up the trail to Hull round the long and winding lanes. My mate had a puncture which was swiftly repaired. We kept of the beer and arrived at the Humber Bridge late afternoon. I can remember sitting at the side of the river, being very contemplative, but not realising what was t come. We are both intelligent guys, but somehow picked up the wrong trail in Hull- going west! We got seriously lost but made it eventually to the Campanile Hull where we stayed on night 2. We had been good so to make up for it, hit the town at night. The Monkey bar stands out as a seminal moment. A real good cracking night out. My mate decided to go for a dodgy kebab and got lost in Hull again, getting back to the hotel at 3am. Fell asleep on his knees and woke up on them!

Day three – definitely dodgy again. After the excesses of the night before- felt very hung over. Got lost in Hull again but eventually found the rail track to Hornsea. The cobwebs and the hangover were soon blown off and in next to no time we were on the promenade eating fish and chips. I always thought it was downhill to the sea, but this felt definitely uphill! Got a lift back home to West Yorks and thoroughly enjoyed it.

Part two was a year later, this time from Oxspring to Southport.

(We don’t often get pass outs from the wives!)

Day one – Brill downhill to start then a steady climb to Dunford. After that, I tried, but had to get off and push up the long steep climb to the tops near the A628. My mate made it to the top! Discussed meaning of life on top of the Pennines then rapid descent to Hadfield- my town- I could have been in the League of Gentlemen in Royston Vasey! Especially in the shop! Lunch in Hadfield and this time alcohol free! (We learnt our lesson in part 1)

From then on in- up and down big style. Not very pleasant and more of an endurance test. However a positive mental attitude prevailed. Made it to Stockport where we stayed at the Travel Inn on day 1. My mate was suffering a bit but a few pints at the Travel Inn raised the spirits. Good night out in Stockport- all work and no play etc. Infact a very good night out.

Day two- paying the price a bit after the previous night but up bright and early. Lost in Stockport and later somewhere around Manchester, but somehow it adds to the adventure. Did brill till Liverpool. We got hopelessly lost and by now its 7pm and nowhere near the Campanile on the quayside where we had booked in. We had been cycling- for 10 hours and lost lost lost. Asked a bloke for directions and before we knew it we were following him on his bike. Given we had been on the road for ages, we were shattered, but he pedalled along at Tour de France speed. We eventually got to the hotel at 8pm!

However, all work and no play became the philosophy again, so it’s up into Liverpool city and a tour of the hostelries. A good night again despite some dodgy Irish bar and an aborted visit to a casino. That night, colleagues definitely became mates. So much adversity, so much hard pedalling, a few extra cans in the hotel and it all seemed so worthwhile.

Day three – Decided to pedal out of town on the main roads as we found the signage for the TPT dodgy. Got to Aintree and despite going the wrong way again and another puncture, eventually got on the main line to Southport.

Then the end came- a bit of an anti climax. No fanfares, no bands, just a rather magnificent sign – the end of the TPT and coast to coast in 6 days. Lift waiting and home.

Have now run out of TPT to do apart from Chesterfield Branch, so did Moors to Sea in North Yorks- but that’s another story.

Cheers to my mate-a top man in every respect and to the wives for letting us off the hook for a few days.

Can recommend this to anybody and just take your time and do it as you want to do it. I hope the German eventually made Liverpool. One thing, what is that smelly factory in Widnes? Never smelt anything as bad in my life before.