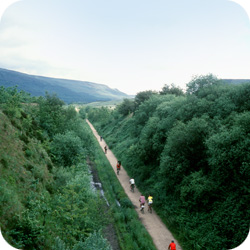 National Byway – The National Byway is a 4,000 miglio (6,436 km) discreetly-signposted leisure cycle route round Britain on some of the most attractive and lightly-trafficed rural lanes, providing safe and easily followed routes for cycling, enhanced by over 1,000 places of interest and historic sites to visit along the way, providing a reason to ride. This links with the TPT by North Ferriby and on the Hornsea Rail Trail and is likely to link in with the TPT in Merseyside as this section of the Byway is developed.