“On June 3rd, 1969 The United States Navy established an elite school for the top one percent of its mountain bike riders. Its purpose was to teach the lost art of cycling and to ensure that the handful of men who graduated were the best mountain bike riders in the world.

Today the Navy calls it ‘first across the Trans Pennine Trail’. The riders call it…..TOP GUN”.

In the memory of Nigel Stewart who fought Pancreatic Cancer so bravely and to support Pancreatic Cancer UK, The Dove House Hospice, Castle Hill Hospital and The Odyssey Centre, our riders took off from Southport on the 29th June with one mission to be TOP GUN of the Trans Pennine Trail. 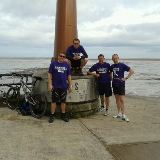 Presenting the riders (from left to right)

Matt (Goose): “Great balls of fire”, not happy with his role as wingman, Goose is ready to go ballistic in order to get his name on the trophy, remember there are two O’s in Goose.

Mark (Slider): “You Stink”, pre-race favourite Slider is actually a lot brighter than he looks. Apparently his Johnson is far from distinguished though.

Dazza (Maverick): “He’s lost that loving feeling”, Mav believes he is Top Gun and which is pretty arrogant given the company he is in. His secret to fast mountain bike riding is classified; he could tell you but he would have to kill you.

Geoff (Iceman): “multiple bogies”, Ice used to fly rubber dog poo out of Hong Kong but now spends most of his time feeling the need for speed on his hybrid.

Following months of preparation and planning the four pilots landed in Southport (by train and car) to a good ol’ British seaside welcome, wind, rain and definitely no sun. Navigation skills were immediately brought into question after it took 10 minutes to find the start line, embarrassingly the TPT monument sticks out like a sore thumb! After agreeing to stop for lunch in Liverpool, the race began with Iceman and Slider taking an early lead into the unpleasantly wet headwind. Everyone decided to carry their gear in rucksacks apart from Mav who sported streamlined panniers needing the extra room for his video equipment and pulling shirts.

The first proper break came at Aintree, lunch in Subway and the sun appeared. Last to arrive, Maverick had been making use of his initial slow pace to come up with ideas to keep morale up:-

Maverick: “Mine is Goliath, what about you Ice?”

Slider: “Cheryl, no doubt about it”

Goose: “Not sure mate, never really thought about it”

Maverick: “How about Gary Glitter instead of Gary Fisher”

Goose: (Drowned out by everyone else’s laughter) “Dammit Mav, I hate it when he does that.”

A couple of miles later and after not much riding Cheryl packed in, the first mechanical of the trip. The ripped tyre would come back to haunt Slider later, but for now a quick repair and he was back in the race.

Now in home territory, Iceman pulled out an enormous lead flying down the narrow towpaths of Warrington. However conditions soon became more treacherous and Ice found himself in an uncontrollable flatspin. Blaming his poor piloting skills on the slickness of his equipment the others all commented that he was pulling off a hell of a gamble with a £700 bike.

Just short of 50 miles, the first day finish line in Altrincham came into view, with a final turn and burn along the high street. Despite having to stop for a lost water bottle, Goose shot into the lead, finding the hotel and taking the champions trophy for the day.

The Altrincham Lodge hotel ticked most of the boxes for an overnight stay, with bike storage and a pub next door. The only drawback was a lack of hot water in one of the rooms, enabling Slider an excuse to use Mav and Goose’s shower and pinch all the toilet roll.

After a healthy breakfast of eccles cakes and boost bars, Slider lead everybody off towards the cycle paths of Manchester. A heavy night of rain made it tough for Iceman and he rode straight through Maverick’s jet wash resulting in his second ejection. Coffee in Didsbury followed by a quick flypast of the Stockport pyramid, the pilots formed up to take on Stockport Town Centre together, taking heed of all the warnings posted in other TPT diaries. Well congratulations Stockport, either they have invested well in new signage or everybody else is blind, we suspect the former. 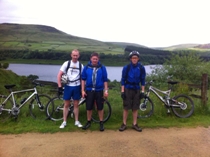 “Watch your mountains”, Goose warned the others as they crossed the M60 and headed towards Yorkshire. Maverick insisted that he wanted a quick 5 minutes in Broadbottom and enjoyed a nice sandwich with Slider at the café on the steep descent, not sure Derek the owner was too happy. After some seemingly unnecessary manoeuvres around Mottram and Hadfield eventually the pilots reached the Longdendale Trail and the long hop up to the top of Woodhead. Nearing the summit Goose suffered the second mechanical, trapping his chain most conveniently next to a field full of sheep. Mav caught the whole incident on video and was looking forward to an editing session a little too much. Finally Slider reached the summit first with Iceman hot on his heels, the fastest descent of the trail beckoned. Wow, Gary Glitter is fast down hills with Cheryl close behind. Ice hits the brakes and nobody flew by, instead he had melted his brake pads, far more care of Chris was required.

The final section through Penistone was fast but dirty, which everyone enjoyed. It was tough but we resisted the temptation to stop at the White Heart in Penistone for a pint and instead focussed on the race in hand, first to the Ring O Bells in Silkstone wins. Mav discovered his body was writing cheques his body couldn’t cash and quickly drops back on the climb out of Oxspring. Without brakes Ice is untouchable and takes day 2, first to the bar gets the drinks though, schoolboy error.

Day 3 arrives and Iceman decides that he has a family to think about. He was holding on too tight and had to hand in his wings. Wise decision, this was the longest day miles wise and everyone has lost that loving feeling for the trail. At first progress was fast, past Worsbrough, Barnsley, Conisbrough and Doncaster without too much effort.

Following a cold lunch the first and only enemy encounter of the trip occurred on the New Junction canal path north of Doncaster. We had an unknown craft and Slider decided to go head to head with the bogey. Unbelievably a man on the back of a barge fired a gun. Mav hastily emptied his panniers and bugged out, enabling him to take a significant lead.

After Doncaster there really was very little to make the trail interesting, the odd railway crossing, farmhouse or bridge but not much else. Power stations in the distance seemed to rotate and Selby is a town continually in the distance. Finally a well-earned break next to the river in Selby allowed Maverick to address his helmet problems, which were quickly sorted with a bit of bashing. 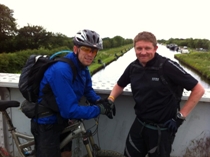 The final hop to Howden passed some very pleasant looking establishments but the lure of our pub B&B was too strong and so we pressed on. Slider took victory, though Mav pushed him close having dropped his load back at the canal. Howden was a good choice for an overnight stay, the accommodation we picked wasn’t. Ok, there was bike storage and the rooms were clean, basic and ideal for scruffy pilots, but jeez the pub clientele were strange. They didn’t look good but the landlady tried to persuade us they never look better than that. Thankfully Howden has some quality establishments and following a superb Chinese we relaxed in a small pub, hidden in the town’s back streets, watching the Euro 2012 final. An amazing night, Slider crashed and burned attempting to take ownership of a rather fetching beer glass, what a stinker. Mav’s pulling shirts worked a treat and the bleating went on well into the early hours of the morning.

Bad news the next morning, Slider recovered his ride from the store only to discover that his wheel was completely lacerated. In addition Mav is also annoyed reporting that his video battery has gone flat, too much use the previous night we suspect. Goole is only four miles away but finally Cheryl packs in just after Boothferry Bridge. Mav and Goose went ahead to find a bike shop and thankfully there was one on the way into Goole. New tyre fitted and cobwebs dusted from Sliders wallet the pilots headed back for Howden and glory.

Its top of the 9th, the scores are tied, its time for the big one. Well a big dose of cake at Goose’s mum’s house in Elloughton. Ruthlessly preying on Mavericks weakness for cream sponge, Stephanie plies him with enough cake to refill his panniers and slow progress ensues.

Riding conditions were favourable and a keen tail wind allowed the guys to go ballistic under the Humber Bridge and onto Hull. After a couple of navigational errors Goose recognised that the trail passed close to one of the charities, so after a photo opportunity at the Dove House Hospice, the home straight to Hornsea beckoned. “Maverick’s dis-engaging sir” commented Slider as he finds a sudden burst of energy and disappears into the distance. “Stay on my wing and I’ll take you all the way in” he cries.

With the TPT Tower in the distance Maverick requested a flyby. All three make a final dash for the finish, just visible in the bad conditions. Slider and Goose slip up, heading to the wrong monument and Mav ghosts by taking the glory. Horizontal rain and a chilling wind from the North Sea cut short the jubilation as does the realisation that the journey home will not be easy. No trains, buses or supporters to take us back home, instead we persuaded one of the locals to fit our bikes in the back of his taxi and back to Hull. Celebratory coffees and chocolate aboard the comfy trans pennine express and then a final victory parade on the bikes into Silkstone. “You Guys” shouts Goose, “you are still dangerous, but you can be my wingmen anytime”. Mav and Slider look at each other, “ah poop, you can be mine”.