The Who Cares? Vertrouwen

The Who Cares? Vertrouwen werkt om het leven te verbeteren van 60,000 children and young people in care and that&#8217;s why 53 bikers of all ages, shapes and sizes tackled the coast to coast Trans Pennine Trail on this June weekend and I was one of them.

Houd er rekening mee – the following ride took place amidst the summer flooding, hence the closed and damaged sections of the Route

This was up north where it hadn&#8217;t stopped raining for weeks, hundreds of people were homeless and some of the Trail was under water so we had to change our route in places. Hopefully we will raise around £30,000 for The Who Cares Trust. If you would like to know more about the trust visit www.thewhocarestrust.org.uk and you may find Harriet&#8217;s account of the trip to confirm that I didn&#8217;t just make it up!

Friday 29th June 2007 saw us assembled for an 8.00 briefing in Southport, just north of Liverpool, looking out over the Irish Sea. The day began well and it was expected to be fairly easy. What hadn&#8217;t been taken into consideration was the glass strewn over the cycle paths around Liverpool and the punctures and the mud we would have to deal with thereon after! On top of this the trail (TPT) had anti-quad bike and/or motorbike deterrents installed in the way of stiles and gates so we had to dismount and negotiate every one – they went on for ever and slowed us right down. We must have had at least 20 punctures and one cyclist had to take to the van as we&#8217;d run out of inner tubes. To make matters worse the hotel where we were due to stay was threatening to stop serving food after 8.30pm – they did soften when they realised there were 60 odd very hungry and thirsty people heading their way, they even brought in extra staff in the end! Crisis hit the group around 8.00 that evening when exhaustion and hunger drove most of the party into the van which left a few hardened fanatics to battle on for the final 15 miles arriving after dark. Fish and chips that night were superb. 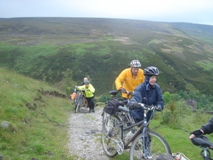 Zaterdag, the big day, the ultimate challenge and we were to go over the Pennines! Not quite what I expected as we had to push the bikes up steep narrow paths but the views were sensational.

On the other hand going down was something else again without the views. I can only describe it as the closest thing to extreme sports that I would ever want to do. Charging down narrow paths which had been washed clean of anything soft, exposing gullies three to six inches deep with threatening looking boulders, stones, bits of flint and branches that had got stuck on their way down during the “rains”! Then when it flattened out, we had large puddles and lots more mud to contend with. The rumour was that one of our leaders became separated from his bike through over eagerness but it&#8217;s only a rumour. I had to adjust my brake blocks that evening as I&#8217;d worn them down so much on the descent.

We finally arrived at the Earl of Doncaster Hotel covered in mud. I didn&#8217;t mention that it had been drizzling most of the afternoon. As we climbed the stairs to our rooms we met up with wedding guests dressed up to the nines, they kept their distance from us! One muddy cyclist met the Bride in the loo – they had a little chat as one would! Some of the youngsters went out on the town that night, Zaterdag, but they were a little quiet the next day.

Zondag – Following consultations with Trans Pennine Trail Office we found the Trail to Hull was still under water and we should find an alternative route. This was great news as we could increase our average speed and test out the tarmac – much better than muddy tracks. 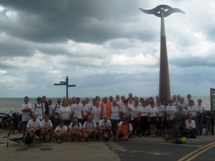 We had to thank the support team who had piled into the 3 vans and a courtesy press car provided by Volkswagen, the drivers, the route planners, the catering team and the person who booked the accommodation etc and Gill of course for making us do it. And then we went home wondering if there would be 7th Biking for Children in Care event &#8216;next year&#8217;!!!