I’ve read quite a few of the stories here.  They’re impressive!  I stand in awe of those who can attempt the TPT in a day, or who can cycle over the Pennines with a bike-load of camping equipment.

Our story isn’t like that.  Neither the two boys nor I can claim any sporting pedigree at all.  The 12-year-old is in the bottom set for PE at school.  The 10-year-old prefers Maths to sport!  And I’m 48 and overweight (BMI of 27).

But when, years ago, we taught them both to ride a bike, they never quite wanted to stop.  So we joined a local kids’ bike club (the fantastic Bolton Hot Wheels).  They’ve never been racing, but often in the holidays they’ve asked me if we can go out on our bikes, and we’ve made a great day out of it.  I suppose being a teacher helps: however hard the job can be at times, over the last 12 years it has given me an amazing gift – time in the holidays with the boys.

Anyway, because of their keenness, over the last few years we’ve always been on the look-out for possible bike rides.  They’ve got to be:

Good access to a train station helps.  Our car can cope with three bikes, but after a bike ride I prefer relaxing on a train to concentrating on traffic!

At first we went for shorter rides (less than 10 miles, say) but over time they’ve got longer – setting a new record has often been a goal.  Our favourites have been:

And it was while we were researching rides around Southport that we came across the Trans Pennine Trail.  Largely off-road, generally flat, well sign-posted, generally good surfaces, train stations dotted along the route – what’s not to like?  We cycled the TPT from Southport to Halewood one day in August 2014 (a then record 34 miles, though that included a detour) – another great day out!  But then during the winter off-season (we’re not pros – so we don’t go out in the cold or the wet) I started to wonder whether the three of us could do the whole trail…

We bought the maps from the TPT office.  They’re really helpful, by the way – definitely worth the 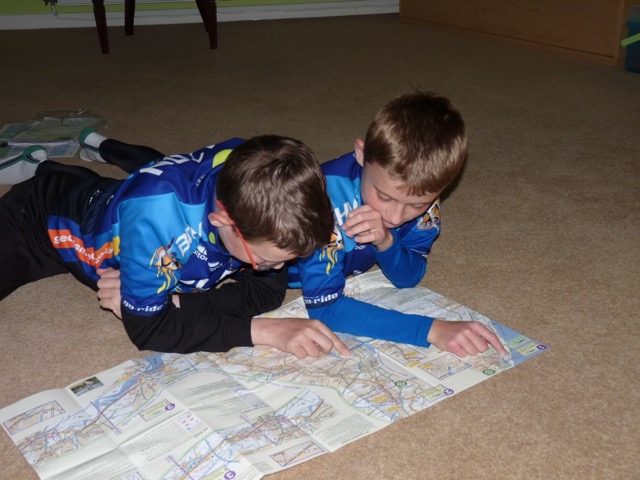 investment.  We downloaded quite a useful e-book on the TPT.  And we started to plan.  Living in Greater Manchester we’d definitely do the TPT west to east.  But how far could we go each day?  Where would that get us?  Where would we stay?

A key issue for the kids was likely to be getting over the Pennines: we’re not great at hills.  One day in Easter 2015 (when our school holidays didn’t coincide), I did a recce from Stockport to Penistone (35 miles) by myself.  It was a climb-and-a-half, but I made it.  There are quite a few annoying downhill bits around Broadbottom – annoying because every foot you drop, you know you’ll have to climb again later!  But apparently, if you’ve got to climb the Pennines, the TPT route is probably gentler than most.  And I reckoned Broadbottom station would be not a bad stopping-place halfway up the climb.  So we started to plan to get to Broadbottom by the end of Day 2 and thus split the climb…

The boys were up for the challenge, although the 12-year-old took a bit more persuading than the 10-year-old; his stamina isn’t quite as good, and he’s getting to the can’t-be-bothered teenage stage.  But in the end he didn’t want to be left out!  We set aside a week in August when Mum was at work.  (Mum cycles a bit but 210 miles would be a little too far for her).  And we agreed we wouldn’t do it if it rained that week! 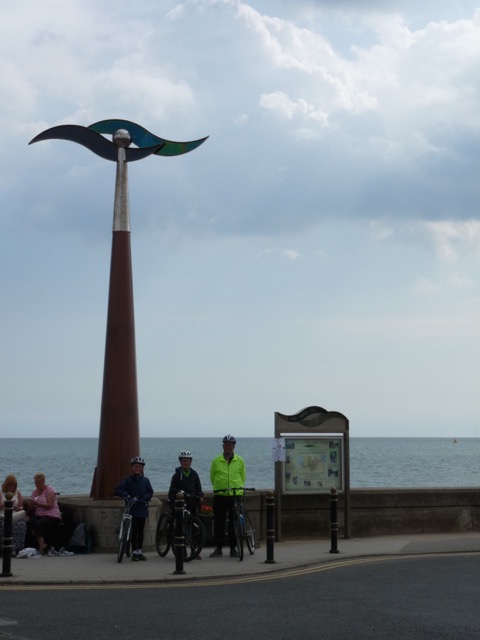 However the first problem we encountered was not the rain: it was that, due to excellent inter-parental communication, Mum booked our TPT week off as one of her holiday weeks.  She didn’t want to come with us, so should we abandon our TPT attempt and do something else as a family?  In the end we compromised, and Mum agreed to be our support car.  Looking back, we couldn’t have done it without her…

Monday 3rd August dawned.  The weather wasn’t promising but we agreed to set off in the car.  By the time we got to Southport it was drizzling, but we decided to get going on the strength of a good forecast for the day (which, thankfully, was accurate).  Our target was Altrincham – further than we’d ever cycled in a day before.  We lunched on the Liverpool loop line; we found our way up the Runcorn Bridge steps and through the diversion due to the bridgeworks; we were ‘bridged’ in Warrington by a jazzily-painted Manchester Ship Canal cruise-boat; but amazingly we made it beyond Altrincham to Ashton-on-Mersey, a record 55 miles in a day.  It augured well. 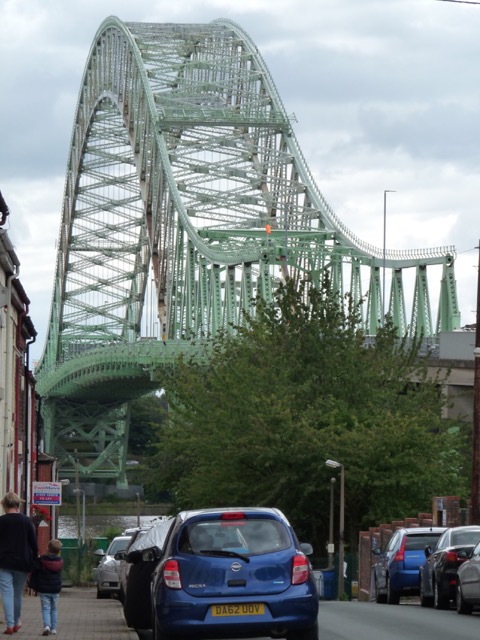 T at all, we were going to do it as a team, so we all had the morning off and recovered a bit.  Revised planning suggested we needed to get some miles under our belt on the Tuesday if we were to complete the ride in a week – so we managed about 17 miles from Ashton to Reddish Vale.  Actually we diverted off the TPT for a few miles and used the Manchester Cycleway to avoid Stockport – our route was flatter, shorter and had better surfaces, although there was slightly more traffic getting from the TPT to the Manchester Cycleway (and back onto the TPT again).

That setback meant we would have to do the whole climb in one day.  Wednesday was a long day in the saddle – or, more accurately, out of it at times: the couple of miles above the Woodhead Tunnels was steep enough, and stony enough, to mean pushing our bikes was the only option.  Our average speed for about 90 minutes in the afternoon was just 2mph…!  But with occasional chocolate to sustain us (and family jokes about emergency ham sandwiches) we managed to get to the top.  Please could we have a decent plaque to mark the summit, TPT office?! 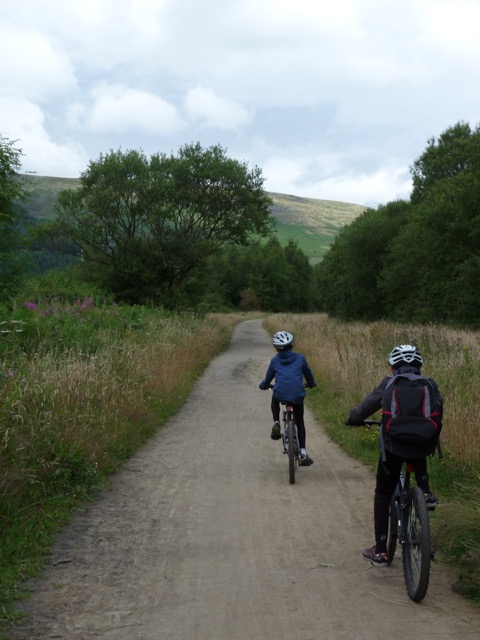 The downhill run to Dunford Bridge and Penistone was delicious – easy miles after the hard slog.  There are all sorts of choices on the TPT at this point, and we chose what seemed like the flattest route through to Doncaster.  However the surface through the Wortley Hall estate was treacherous – it was like cycling on marbles – and at the end of a long day, the 12-year-old fell off and grazed his elbow.  That was the low-point of the entire trip, actually: nursing him on to our rendez-vous with Mum in Elsecar was a real challenge.  Thankfully the last couple of miles to the Industrial Centre there were downhill!  44 miles that day wasn’t a record, but almost 3,000ft of climbing most definitely was.

The 12-year-old was still a bit sore on the Thursday morning, so we needed to keep our morale up as we headed out of Elsecar.  The route was pleasingly flat and easy, but the real morale boost was unexpectedly provided by the England cricket team: Mum rang us when we were just outside Conisbrough Castle to tell us they’d reduced the Aussies to 50 for 9!  I’m sure our cheer could have been heard from the Castle battlements.  That gave us the incentive to see if we could get to Selby in time to get home for Channel 5’s cricket highlights – but a 15-minute delay for a police incident at a level-crossing north of Doncaster put paid to that idea.  Still, the 50 miles we covered that day was our second-best ever in a day. 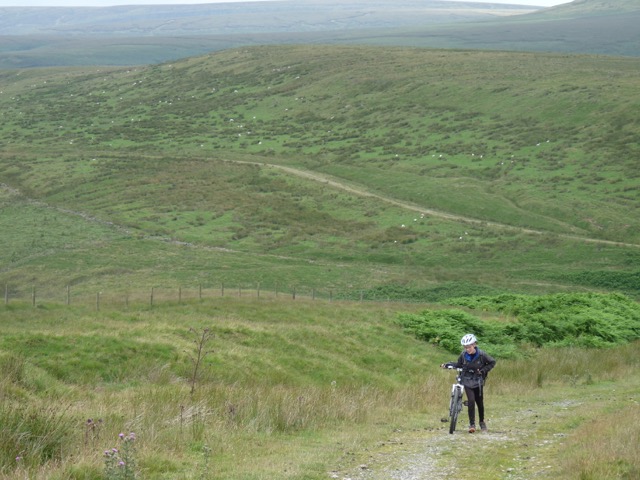 st Yorkshire skies.  It wasn’t the most inspiring 43 miles we’ve ever done, but the great variety of TPT stamping stations kept us entertained along the way.  Although some places seemed perplexed when we asked them for a stamp, a couple stood out as going ‘above and beyond’: the Three-Ways Café is definitely worth a visit, and the unstaffed Blacktoft Village Hall restores your faith in human kindness at least.  Just outside Hull, an unexpected little hill in Welton took its toll on tired legs – but the run-in to the city centre was a good one, and we met Mum at Hull station.

Up till then we’d gone back to Greater Manchester every night – Mum had picked us up the first three days, and on the Thursday we got the train back from Selby to meet Mum at Stalybridge.  On the Friday, though, we booked into a Travelodge in Hull.  Four of us and three bikes in one room was a bit of a squeeze, and the middle of Hull isn’t the quietest place on a Friday night; but we were refreshed enough for the final assault to Hornsea on the Saturday morning. 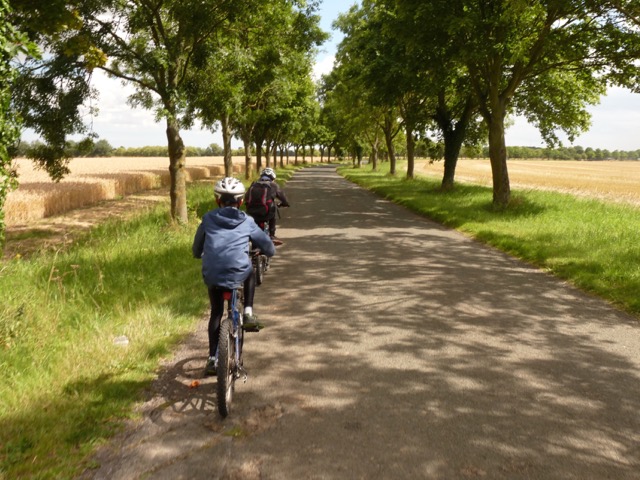 We made good progress on that final leg, and by 11am it was all over!  There were a few other TPT-ers underneath the TPT sign, including some who had come over from Europe especially to do the TPT – is it that famous?!  We’d planned to have fish and chips on the seafront, but we were a bit early for that and so decided to get going on the journey back to Greater Manchester.  A celebratory lunch at Drewton’s – a great farm-shop-cum-café in South Cave – sustained us for the long drive back across the Pennines.  It was odd to think that every mile we drove along the M62 we’d cycled at some point in the previous six days! 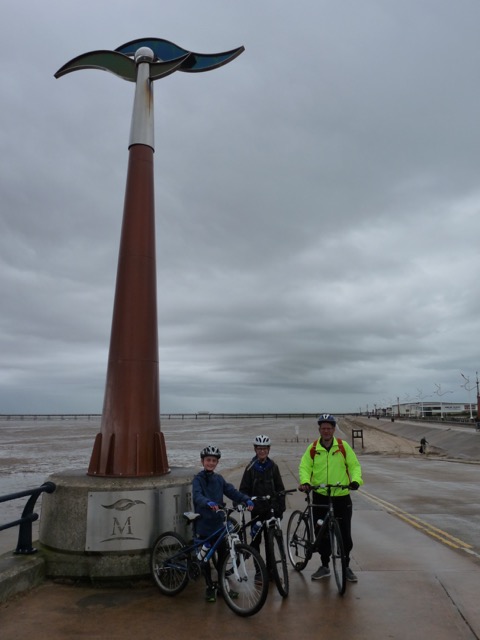 210 miles in 4 full and 2 half-days may sound impressive, but far more impressive was that the great British summer gave us almost perfect weather (generally dry, not too hot, not too windy)!  It was also amazing that we had only one minor route-finding error (the maps were great on the rare occasions when the signage petered out), and no mechanical issues at all (good job, as it’s definitely not a strength of mine…).  We met some interesting people along the way, and found that averaging around 40 miles a day is not too hard really, even for an occasionally reluctant 12-year-old, a 10-year-old and their overweight Dad… well, it’s not too hard if you train for it and plan in advance.

I took plenty of pictures and had them made into a photo-book: the boys each have their own copy now alongside their official TPT certificates.  The 10-year-old was awarded “Sports Person of the Week” at his primary school (the first time any of us has ever won a sporting award!), but the 12-year-old is still in the bottom set for PE at his secondary school.  However, he knows – and he has a book and a certificate to prove it – that he’s done something probably no-one else in his school has.  For both of them (and for me too), we’ve learned some lifelong lessons in perseverance and teamwork – together, everyone achieves more.  And we’ve shared in something special as a family. 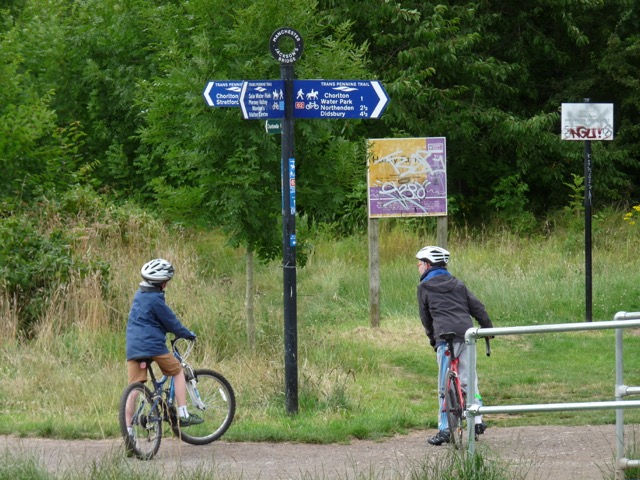 That’s why I would wholeheartedly recommend the TPT to anyone who’s remotely inclined to give it a go: if we can do it, you can!  We think the secret to conquering the TPT is to:

The only problem we now have is… what on earth do we do next summer?!