The TPT in 4 Chunks

The TPT in 4 Chunks – Andy Williams

I first got the idea to ride the TPT 3 years ago while staying in Penistone and experiencing the beauty of the trail around Dunford Bridge and Silkstone Common. I decided that I needed to complete the ride before my 50th birthday. The next 2 years were taken care of with illness and family emergencies that meant I couldn’t get the training in feel confident in completing it. This year was different and planned to ride in April but the onset of Covid 19 meant that I was facing another year off. Thankfully with the sensible action of the British public the lock down was eased and I was able to do 600 miles of training up to July.

The 4th of July arrived and despite the constant drizzle I set out on the bike to Wigan Wallgate to get the train to Southport and the iconic marker at the start of the trail. Back pack filled with homemade energy snacks, fig rolls, bagels and chocolate. Drink bottles on bike and isotonic in my hydration pack I felt confident in making my target of 80 miles in 10 hours to give me time for stops and photos. The only issue was I’d forgotten my face mask and thought my first day would be scuppered before it began. However a kindly guard ma 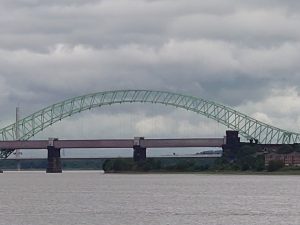 naged to provide me with one.

I reached the starting point at 7:45 hoping to find a dog walker for the obligatory photos at the start, unfortunately the rain seemed to deter these and terrible selfies it was. There was a mild South Westerly blowing and I wasn’t going to let the rain dampen my spirits so off it was towards Liverpool. The rain relented but the trail in places was sloppy and I was glad to come to the North Perimeter road in Bootle and then the famous Aintree racecourse loomed into view. Stopping for a handful of mixed fruit and a couple of energy balls it was time to set off again and down the really well maintained section towards speke boulevard. The rain started again but I had stopped under the flyover so I could take on more refreshments. After a quick phonecall home to update my condition it was off towards Widnes on a really quiet road section and the miles seemed to tumble by. After passing the new Mersey gateway bridge and the stunning Runcorn Bridge it was a bit of a hassle to get around the diversion in place but Google maps got me round ok and I was soon on the st Helens canal but the rain had filled all the puddles and the crushed yellow stone was quite sloppy. Passing Fiddler’s ferry tavern I set my sights on where I planned to stop for Lunch at where the trail picks up again in Latchford. I was there for 1pm but in a bit of a state. Still wet from the steady rainfall and as muddy as a wallowing wart hog. I decided that getting over Woodhead pass was not going to be an option today so changed plans with my pick up team to meet me at Stockport. Day one ended in Stockport with me completing 69 miles in 8 hours and being very soggy. 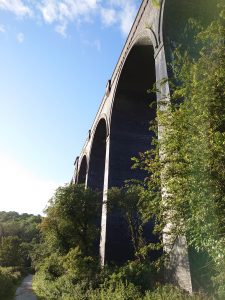 As with everything nothing goes 100% to plan so it was home to re plan and reschedule for the following Friday. As I work nights I decided that after my shift on Thursday I would hop the train to Manchester and resume with a planned 45 miler over Woodhead, through Dunford Bridge and stop overnight in the premier Inn at Barnsley. The day was a much better day thankfully as being an old school rider I always dress the same way. Combat shorts t shirt and trainers. Never have worn a helmet and never will. I knew my attire would be a risk over the pass but the day was good and I arrived in Mottram in good shape. Riding up to the disused tunnels was a pleasure stopping for photos of the amazing scenery on the way. From the tunnels is a different kettle of fish as it’s steep,rocky and in places where it was possible to ride my road tires couldn’t grip on the grass so walking was the order of the day. Again the views were breathtaking and the signage was excellent. As I reached the road down to Dunford Bridge it was back into the saddle but no peddling required as my Strava told me later I was clocking 44mph which despite the twitchy bum time was exhilarating. Turning into the Don Valley section it took me a while to get to Penistone due to the multitude of photo opportunities. Leaving Penistone behind it was off towards Silkstone and then my stop at Barnsley. I reached the Premier Inn just as the rain started and it was here I had my one and only puncture which considering the surfaces I rode on with road tires was quite something. The staff at the Premier Inn were fantastic allowing me to have my bike in my room to change my inner tube out. Fully refreshed from a pizza and A LOT of snacks I turned in knowing Saturday was going to be my biggest challenge on a bike I’d ever faced.

The alarm went at 4:30 and I fuelled myself with two tubs of ready oats and set off excited at seeing Conisborough Castle and Viaduct. The day was warm and the breeze at my back I was soon ticking off mile after mile. After several stops for Photos I set my sights on my halfway point which was Selby swing bridge. Averaging 11 mph I was out amongst the rolling fields and industrial landscapes all in their own way picture perfect. I reached Selby for 11 and found a public convenience. Oats, figs and peanuts take their toll you know. After putting my feet up for an hour it was off again with my target of getting to Hull for 3pm and a train back to Manchester and link to Wigan. The ride to Hull was amazing all on cracking surfaces I felt I could ride forever, that was until I got to something I should have expected from a place called surprise view on High Road Brough. It was a killer and almost broke my resolve but I must admit I walked to the top and free wheeled down to North Ferriby and what I thought was the home straight but no works on the path near the Humber meant I had to back track and come down to the centre of Hull on the main road but I have never been so happy as when I saw the paragon exchange and the end of my 85 mile slog. I had never ridden so far in one day and the sense of achievement in knowing I only had 15 miles to complete the following week was palpable. I headed home on the train feeling amazing. No tiredness in the legs only a mildly aching posterior. 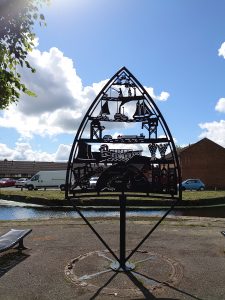 Fair to say the last 15 miles from Hull to Hornsea were quite uneventful but no less important. I took care of those in just on the hour and was met by my partner who had come over from Ireland to be there at the finish line. As I turned the corner from the old station and saw the sea front and the eastern end of the trail the sense of accomplishment was immense. We celebrated with with customary fish and chips and donuts and began to plan the next adventure. I had done it and with three days to spare before my 50th. Coast to coast on a hybrid bike with 8 gears. I have to take my hat off to the organisation behind the TPT the signage and condition of the trail is fantastic. I rode this and raised over £650 for the Children’s hospice of Norther Ireland.