After about 30 seconds searching I found the TPT home page and started to think. Here I was just about to turn 45, over 17 stone and in need of a kick up my capacious backside to do something about my weight. I decided to return to the saddle, having not cycled further than the local takeaway in over 25 years and thought that the TPT would be a good place to start.

On 29th August, 61 days after my first tentative pedalling, I set off at 05:55 from the car park outside Penistone Fire Station. I said a tearful farewell to my wife and daughter (who responded to my efforts by immediately returning home and going back to sleep for 2 hours) and headed off up into the darkness.

There was no headwind, so I carried on along the promenade to Derby Baths (19:10) and there was no point in stopping at that point so I continued along the Wirral Coastal Path to Hoylake arriving at 19:45. I never thought I could make it that far in one day. My calculations, including various diversions put it at 105 miles in the day and I had a pint of beer, an enormous plate of stew, a hot bath and then slept for 12 hours. 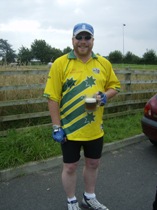