Southport to Hornsea by Paul, Belinda, Carol and Harry – July 2021

by Mandy Loach | your stories | 0 comments

After a number of Covid19 safe video calls we all agreed to attempt the challenge of cycling from west to east across England on our hybrid bikes. We class ourselves as enthusiastic, but definitely not, expert cyclists so the prospect of completing the 215 miles with the Pennines in the middle was quite daunting. We were however very keen to take up the challenge and to complete the ride.

We bought the official Trans Pennine Trail guidebook and the west and east TPT maps. We also created digital route maps of each day and uploaded them to a SatMap 20. It was decided that we’d complete the route in 6 days as follows:

All B&Bs and hotels were pre-booked and were mostly on the TPT route.  A good breakfast at the start of day one was essential preparation.

The TPT marker was easy to find, the weather was great, and we set off. The day’s cycling was mostly on flat, smooth surfaces that were well signposted. A lot of the route is off roads and away from traffic and some tracks follow the routes of disused railways. 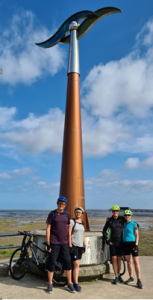 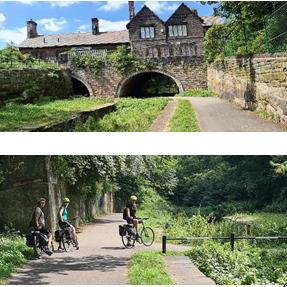 Day two was also relatively easy cycling. Some of the signposts are obscured which makes some sections difficult to follow; however the SatMap20 was very useful for keeping us on track. A lot of the track was within sight of the Mersey River with spectacular views. It also included some short but steep sections and we had to push our bikes up and over a steep wooden walkway. 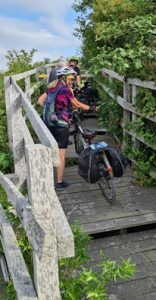 Day three was the day that we were all dreading. It was the one day with most of the steep climbs over the Pennine Hills. We set off in good spirits and fine weather.

The cycling was relatively easy at the start with amazing scenery. In the distance we could see the looming hills with the inevitable climb!  There were a few occasions where pushing our bikes made more sense than trying to pedal them, but these sections were quite short, and we still made good progress. It did start to rain here which added to the challenge.  We soon arrived in Penistone, soaking wet but really pleased we’d completed the big climb. 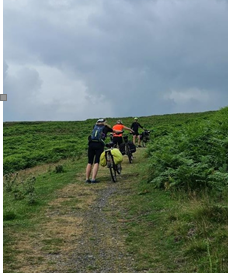 Day four was to be the longest daily stretch all the way to Snaith.  At the beginning we encountered some rather steep sections both up and down so occasionally had to get off and walk. On the whole the cycling was good and the rain held off. The views were amazing and it wasn’t long before we arrived at our hotel.

Day five started with a flat tyre! But we soon got underway on a mainly downhill ride to South Cave. We were held up for a while as we waited for the rush hour to pass before heading towards Howden for our coffee and cake stop. 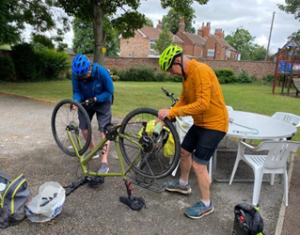 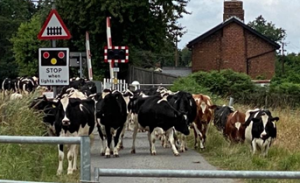 A lot of the trail was good surface and easy to cycle on and we crossed safely over busy main roads. Howden was a great place for a pit stop and an explore. We had our coffee and cake stop at The Cheese Shop adjacent to the ruins of the monastery.  A lot of the trail followed the picturesque canal towpath. 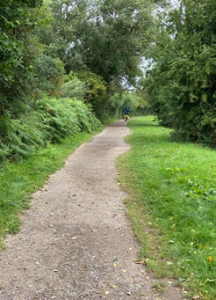 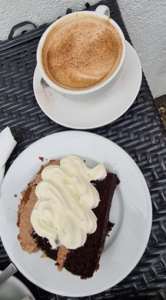 As you can see – still smiling at the end of day five!

Day six and we are nearly there. Just one more challenge – it was raining heavily. In fact the weather forecast announced we were being battered by the tail of a tropical storm. Strong winds and torrential rain didn’t stop us heading further east to our final destination. Once we were wet we couldn’t get any wetter!  Appropriately dressed for summer weather we headed out on a mainly downhill trail towards Hull. 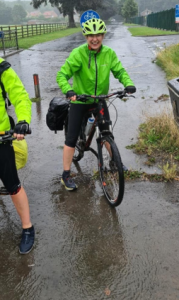 The route crossed us back and forth over very busy roads. We also had our first sighting of the iconic Humber bridge which was shrouded in low rain-bearing clouds.

After photos under the bridge, we completed the next few miles into the City of Hull. At this point the rain stopped and cycling was much more comfortable. Hull has lots of fantastic buildings and places to explore but we had to carry on. Just a few more miles, all along off-road tracks that mainly followed the old railway lines and we finally arrived in Hornsea.

The trail was at times challenging, mainly due to the weather, but always enjoyable. We met lots of people along the way who were so friendly. They enthusiastically recommended the best local cafes, warned us about glass on the paths, asked what we were doing and gave us encouragement to carry on. It was a week we’ll never forget and are so glad we did it. 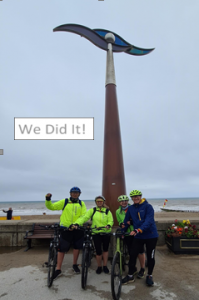