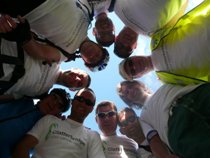 The Journey to Hornsea

The first puncture occurred in my shed which got the day off to a bad start, particularly as I had lent my pump to Pop and had to go to Halfords to pick up a new one. We were in a rush and couldn’t get the tyre off so I had the great idea of using a knife… and speared the intertube, meaning I had to change the tyre all over again. I was a bit frantic at this point so Jane came to the rescue giving me a Richy a lift into town and we just made the train to Manchester Oxford Road meeting Frank, Ste and Paul on the train.

We had to cycle across to Piccadilly and true to form I had another puncture in the back tyre which I changed in the middle of the train station. Met Nicky on the first class train ride to Hull and the game of cards put me in a better frame of mind which was just as well because we got lost in Hull on the way to Hornsea. I think our Paul ended up asking a Community Support Officer to point us in the right direction.

It must be about 15 miles to Hornsea and the Trail is fine but with our big rucksacks it seemed really hard and I was worried about whether we would complete the 210 miles trip. The welcome from the Acorn lodge B&B was really warm and the family that owned it were really friendly and laid back. The house was fantastic and we killed a couple of hours in the rooms watching TV before heading out to eat at Swiss Tony’s cottage. At the bar I met a few of the locals then headed back to the table, beer and wine plus a brandy chaser for some brave souls.

Day 1 Hornsea to Braithwaite (75 miles) – Teddy took all our big bags off us in the morning and loaded them in the Ute, having a support vehicle and supportive driver made such a huge difference. We took our photos at the start of the trail, dipped the back wheel in the North Sea and left Hornsea by 8am.

We started off slow and sociable but after about half an hour we seemed to shift up a gear. We were trying not to think of the enormous distance ahead but separate the ride into 10 mile stages.

After getting lost the night before we all grouped up and ghosted through centre of Hull with very few problems. We sang happy (66th) birthday to Frankie in an alley then he jumped on his road bike and towed us all in his slip stream to the Humber Bridge. The view back to the Humber Bridge was a welcome one and the villages west of Hull, such as Melton, where a much more pleasant environment. At Ellerker we had a break and lay on the village green chatting to another group of cyclists. Teddy was asked not to concentrate too much on provisions but make sure he got bet on ‘we have a dream’ in the 2:40. This went down but we sailed on with few problems other than Pop’s mudguard catching on his back wheel and acting as a brake.

Most of the first day seemed to be on minor roads through corn fields, nice enough but a bit monotonous, so we really pushed on to get to Howden (45 miles) in by lunch. Howden was a really nice place and we stopped in the park for a picnic. Next up was Selby where a couple of the riders took a wrong turn and missed the canal on the way out of town. Getting off the canal the whole group missed the exit, a left turn over a small bridge as the direction. The signage wasn’t too clear so we bent it back into shape. My most miserable section (of the whole ride) was an abandoned airfield outside Brayton. The rain and wind kicked came in and I was really struggling to get going at the back of the group. I was actually relieved to find that I had another puncture, glad it was my front wheel and glad that Steve was just behind me with his steel tyre spanners. We caught Teddy and the other riders up in a pub at Hirst Courtenay before a wet ride to Snaith, 65 miles in.

Despite the rain everyone was in the groove by this point and we motored to Braithwaite after luckily seeing a left turn off the road outside Snaith that was hidden in foliage. The Threeways cafe was a bit difficult to spot coming in to Braithwaite and three of the riders overshot the destination by a mile or so. Once we found it though Nigel the owner gave us a really friendly welcome. You camp in the really nice gardens of the house and he has a little shed set up as a cafe. He let us store the bikes in his large garage and he even gave a couple of the lads a lift to the chip shop as we set up the tent. The fish and chips were gorgeous and we had a few cans and had a bit of Beatles and Johnny Cash before bed.

Day 2 Braithwaite to Hadfield (65 miles) – Bacon butties, coffee and toast to start the day. Nigel the owner of the Threeways cafe was a star and even donated £5 to our charity. The scenery was much more varied on the second day, I remember a lovely stretch down by the river Don past Sprotbrough, it finished with a climb up a bank next to a viaduct that really killed us off. Uncle Frankie had been ok on the road bike till this point but from here things started to get tough, he had a fall on a slippery smooth piece of wood and cracked a rib.

I can’t recall too many problems in terms of following the trail and we all reached the stop at Old Moor RSPB, outside Brampton in good time. Me and Steve nipped in to the cafe for a cappuccino and by the time we came out most of the other riders had shot off.

There were quite a few route options and we had to keep our eyes out but the signs were good we found the Dove trail and then the first diversion around a tunnel. There was a rough climb and a proper mountain bike decent before we eventually hit the open hills outside Oxspring. We flew down a steep road descent and missed the right turn to Penistone but still hit the old train line and got back on track to meet the rest of the group at the Rose and Crown in Penistone. The pint of bitter steeled us for the ascent to come; pretty muddy into the wind but then came the road ascent to the Woodhead Pass. Frank who had been steaming along without a problem hit his first patch of bad luck with a puncture and gear problem on the first really steep incline. This left David Rimmer king of the Mountain with Paul and Richy already long gone to Hadfield. At the high point (453m) of the trail I crashed out in the grass on the side of the road and waited for the other riders. Dark clouds massed and the rain came, Frankie had to take to the road as the descent was a real test even for the mountain bikes. In the wet, without disk brakes, it was pretty dangerous especially at a hard left turn on a small cliff leading to some shallow rocky steps. Down by the reservoirs it was really muddy but as we came off near Padfield we luckily met a guy who was cycling up to near we were staying. At the end of the day the last thing we needed was another monster climb but that is what we got.

Day 3 Hadfield to Crosby Beach – A combination of tiredness and the most consistently rugged trail between Hadfield and Stockport meant that for the first time we began to fall behind schedule. It was great fun on the mountain bike and beautiful alongside the river Tame. By the time the back markers got to the Tesco at Stockport most of the leaders where ensconced in the cafe, so, me, Pop and Frankie decided to push on. We did well to stay focused through Stockport and made it across the city centre without a problem. Unfortunately Frankie then picked up a puncture under the M60 and we lost our little advantage.

The section through Didsbury to Stretford was also a bit tricky and some of the riders got lost. Our little group was more fortunate and we maintained a good pace alongside the beginnings of the River Mersey. The legs were starting to feel heavy and bums and knees also beginning to ache. It was a joy to see Teddy, Frank and Ste at the Jackson Bridge pub for lunch and we’d recommend this pub for a stop.

From Sale to Warrington me and David put the hammer down and I had a fall after colliding with a bush when trying to make out a TPT sign. Fortunately I just skinned my elbow and the bike withstood the fall. Despite this we pushed on toward Warrington, everything was flat through Lymm and the trail traffic increased with David reluctantly having to use his horn.

At the bike shop in Warrington things went a bit pear shaped. There was a junction with a number of exits and it wasn’t too clear. Back on track we were now starting to ache and the bikes squeak as we made Fiddlers ferry then the Runcorn Bridge. There is a really nice set of steps and bridge alongside the Mersey just after the bridge and we soon made Hale to meet a group of family and friends. Big thanks to the patrons of the Child of Hale pub who donated £65 and were very friendly.

The last stretch took us on to familiar territory with a ride through Speke. We all stayed together and shared a little moment near Aintree to congratulate ourselves for a job nearly done.

The small section along the Leeds Liverpool canal broughtYS – Mike Rimmer – Crosby back memories of last years ride but we soon diverted off toward Crosby. Somehow, despite Steve picking up two punctures, we made it on time to Crosby beach and Anthony Gormley’s Iron Men. There was a lovely welcome from friends and family, a glass of champagne and sausage butties. Happy days.