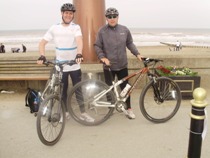 For sometime myself and a work friend, Phil Hart, had been planning to complete the TPT. We had done several months of training prior to the challenge by completing parts of the trail between Dunford Bridge and Selby, this was ideal with both of us living in Doncaster.

After several photographs next to the seamarker we set off. The first 30 miles through Liverpool and Spike Island next to the impressive Runcorn/Widnes bridge flew by.

Unfortunately after Spike Island we came across a charity bike ride from Manchester to Liverpool with around 3000 cyclists travelling in the opposite direction, which was eventful to say the least!!

Arriving in Stockport after around 65 miles and 7 hours of cycling we stopped at a local Tesco’s for extra supplies before starting on the toughest part of the TPT the PENNINES!

Luckily the weather was very kind over the Pennines from Broadbottom, through Hadfield and the climb along the reservoirs up to the Woodhead Tunnel. After arriving at the west entrance of the Woodhead Tunnel we were shocked to see what hill we had to climb in front of us. It was well worth the effort though just for the view at the TPT summit looking east towards Barnsley and beyond!

The fast decent into Dunford Bridge was adrenalin pumping at high speeds and knowing that we were closing in on Doncaster, we arrived in the Don Gorge near Sprotbrough at 21:30 hours, after 14 1/2 hours cycling and the day light running out.

Day 2- 31st May 2010 – Phil and I met on the trail at 04:30 hours at Cusworth, feeling very sore in the saddle area. We arrived at Burn airfield just before Selby to a very strong head wind which was very tough. We arrived in Selby at 08:00 hours looking for a shop for more supplies to take us on to the finish line at Hornsea. To our amazement we couldn’t find a shop anywhere and by this time we were mentally and physically feeling the strain. We pushed onto Hemingbrough and found a Londis store which was very welcoming!! We stopped and worked out how far we had to go and we were still making goodtime.

Passing through Howden, Blacktoft and onto Weighton Lock we steamed passed two cyclists who were also completing the TPT.

Passing through Ellerker and onto North Ferriby you could see the magnificent Humber Bridge and at this point we knew that we could complete the Trail.

The last 14 miles felt very long because we had a head wind and we were both feeling exhausted.

We arrived in Hornsea and passed the seamarker on the seafront at 15:30 hours.

I felt very emotional as my Brother-In-Law, Richard Fairhurst, had suddenly passed away on the 28th May 2010 and he would have been very proud of our achievement.

Special thanks go to Phil Hart for a great riding companion and friend, Phil Chapman for transport to Southport and home from Hornsea, the two fabulous mountain bikes, GT and Kona who were very reliable and with no punctures!! And not to mention all of our sponsors and all monies raised were for the British Heart Foundation.

THIS RIDE WAS IN MEMORY OF A KIND, GENEROUS AND WONDERFUL BROTHER-IN-LAW, RICHARD JOHN FAIRHURST, WHO SUDDENLY PASSED AWAY ON FRIDAY 28TH MAY 2010 AGED 45 YEARS.