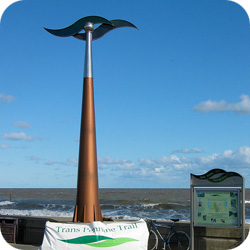 The Trans Pennine Trail in the west stretches from the Victorian seaside town of Southport on the Irish Sea and the city of Liverpool to Barnsley at the eastern foot of the Pennines.

Between these lies an amazing range of sights and scenes along the route as you pass through the countryside, towns and cities of the North of England. You can follow historic railways and canals and travel in the footsteps of packhorse traders on ancient salt routes.

Much of the TPT is on disused railway paths and the Cheshire Lines and the Liverpool Loop Line are the first you’ll encounter from the west, the former through peaceful farmland of Lancashire, the latter as a hidden green corridor passing sandstone cuttings and old station platforms as you pass through the city suburbs.

Following the TPT route option into the centre of Liverpool you’ll travel down the famous Penny Lane, and through the Victorian greenery of Princes and Sefton Parks (the latter with its splendid restored glasshouse) to eventually reach the Pier Head with nearby ferry services. Alternatively from Sefton Park you can head to the Mersey waterfront and reach the Pier Head via the riverside.

Leaving Liverpool you’ll pass through Halewood Country Park and the village of Hale – complete with thatched cottages and country pubs – to reach Pickering’s Pasture Country Park with open views of the dramatic Mersey Estuary, dedicated as a European Ramsar site for its wildlife importance.

The TPT then hugs the estuary before heading inland along the tranquil St Helens Canal towards Warrington. Canal and railway paths take you through Warrington to Trafford, where the TPT picks up the River Mersey once again. This time you follow a winding riverside path along the Mersey through the southern suburbs of Manchester, passing by Chorlton Water Park Local Nature Reserve. At Stockport the TPT has two options: one taking in the attractions of the centre – including the unique Hat Museum and Air Raid Caves, or the quieter route to the north of the town.

Leaving Stockport through the leafy Tame Valley, the TPT soon reaches another railway path at Apethorn. Bridleways and roads continue to Broadbottom and the western fringe of the Pennines. After the village of Hadfield, (home of the TV’s League of Gentlemen), you’ll enjoy the dramatic scenery of Longdendale, where the former Woodhead Railway takes the TPT through the Peak District National Park. Passing moors and reservoirs the Trail eventually reaches its highest point (435m/1427 feet) on Windle Edge. The short climb is rewarded with a long downhill to Dunford Bridge, to join the railway once again – which goes traffic free right through to Penistone and beyond.

Travelling east from Penistone, for the most direct route you’ll leave the railway at Oxspring and follow the old packhorse way at Willow Lane and the railway path along the Dove Valley. After passing Worsbrough Country Park you can head north to Barnsley and the route north to Leeds, or continue on the coast-to-coast route towards Doncaster. Just west of Barnsley you reach the RSPB’s Old Moor reserve and centre – the mid point of the coast to coast route. An alternative is to follow a southerly loop via Wortley, Tankersley and Elsecar to RSPB Old Moor.