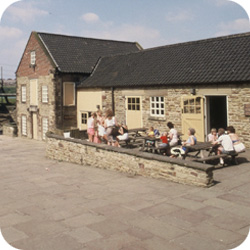 The central section comprises the north-south route of the Trans Pennine Trail running between the bustling city of Leeds and Chesterfield.

You’ll find a range of sights and scenery as the TPT passes through countryside, towns and cities of the North of England, on historic railways and canals, riverside paths and woodland bridleways.

The TPT starts in Leeds alongside the Royal Armouries – just one of the many cultural attractions to be found in this vibrant city. It then follows several miles of peaceful paths along the River Aire and the Aire Calder Navigation canal before joining the railway path at Bottom Boat and onto Stanley Ferry marina. From here it skirts Wakefield, passing through the beautiful conservation area of Heath and then Anglers Country Park and the scenic Barnsley Canal. The trail links into Barnsley on railway paths, whilst the main route offers different options for travelling south.

The Elsecar Greenway passes through Elsecar Industrial Heritage Centre, whilst the Timberland Trail goes via the village of Wortley. A choice of three routes via Wharncliffe Woods, the historic Wentworth estate or Sheffield’s Forest Loop (through Westwood Country Park and Greno Wood) all of which lead you to Meadowhall shopping centre.

The route to Rotherham partly follows the River Don and takes in the Magna Centre along the way. There is a cycle lane and then quiet roads to Rother Valley. For Sheffield youl travel along Five Weirs Walk which takes the TPT into the heart of Sheffield and to the stunning Cobweb Bridge and then south out of the city on cycle paths and quiet lanes. A third option avoids the city centre and takes you via Darnell. All routes eventually converge at Rother Valley Country Park complete with lakes and water sports facilities.

A disused railway path south from here takes you into Derbyshire on the Beighton-Staveley section of the TPT. After Renishaw you’ll have one last dilemma on the journey to Chesterfield – to follow the Chesterfield Canal towpath, passing the visitor centre at Tapton Lock, or the alternative route using a railway path and bridleways via Inkersall. Either way you’ll be rewarded when you finally reach Chesterfield with the view of the town’s amazing crooked spire church amongst other gems!