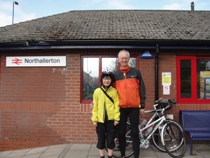 I’ve made a short YOUTUBE of our (Naoko & me) cycle trip on the Trans Pennine Trail.. http://www.youtube.com/profile?user=GASBAGSMike#p/u/0/oHhpppLx5iA

I had never heard about the Trail until a friend said that he and his daughter were booked to cycle it in June. I checked it out on the website… https://www.transpenninetrail.org.uk/ and thought Naoko and I might cycle it. I sent off for the maps and the guide to the accommodation on the route. I was surprised that the maps were dated 2001 so it has been around for a few years – the website states 21 years! My cycling group, GASBAGS (Great Ayton & Stokesley Biking & Guzzling Society – www.gasbags.org.uk) had never heard of the TPT though we celebrate our 20th anniversary this year

Naoko was up for the trip so I booked trains and accommodation for late April. I booked the Trans Pennine Express train from Northallerton to Manchester then a train from Manchester to Southport. Both trains were classed as bike friendly but only had space for 2 bikes. I reserved places for the bikes on the TPE train but could not reserve places on the other train. For the return leg I booked TPE trains from Hull to Leeds and Leeds to Northallerton and again reserved 2 places on each train.

We set off on April 14th with me cycling to Northallerton and Naoko getting a lift from a friend. There were no problems with the trains and we arrived on-time in Southport. After staying overnight with my in-laws (excellent meal and plenty of drink), Naoko and I cycled off the next day on our first leg of the TPT expecting not too long a day as the estimated mileage was just 56 miles and on the flat. Based upon the GASBAGS average mixed cycling speed of 8mph we expected to be cycling for about 7 hours but we finally reached the B&B in Sale after 10 hours with no time for lunch – the reduced speed due to some stony paths, many cycle gateways of different types and stops & starts going through the outskirts of Liverpool, and one puncture. The route around Liverpool was the only time we encountered broken glass on the route. We passed the sand dunes of Southport then the Aintree Race Course where I had lost £20 on the Grand National the previous weekend – my one bet a year. The route continued past the John Lennon Airport and onto Hale where we misread a sign and had a slight detour – I actually had a front bar bag on the bike with the map on display in a plastic case but still got lost! Just before Widnes we met a very unfriendly bridge where we had to push our bikes up steps which were very difficult with the heavy bike bags – no-one said we needed to be weight lifters! Our B&B was right in the centre of Sale so I had to choose between cycling on the A56 or the A6144 – I decided on the latter which took us past a Premier Inn and I wished I had booked in there.

The second day was claimed to be 44 miles, with the latter part going over the Pennines via the Woodhead Pass. In fact we cycled 52 miles taking 11 hours after a one or two misleading signs. We had difficulty going through Stockport as the 62 route was marked on the road but the 55 route pointed in that direction with the 62 sign pointing in a different direction – however we forged our way through but then had a detour when we lost our way near elephant steps marked on the map – our motto became if in doubt retrace our steps till we find a sign. On reaching the reservoirs just before the Pennines I missed one key sign so we ended up cycling 4 miles up the Woodhead Pass on the road with cars & lorries streaming past. Almost at the top we turned left and coasted downhill till we reached the River Don. I thought we were almost there and was relaxing when my bike was struck by 3 punctures all on the same wheel as the day before – the tyre wall had turned upward! The Old Nunnery Guesthouse in Penistone was very good and we enjoyed an early night.

On the third day my first job was to buy a new tyre and 3 inner tubes. I cycled downhill to the bike shop on Naoko’s tiny bike (I am 2 metres tall) with my back wheel in my hand – I wanted to ensure the new tyre filled. The route from Penistone to Selby was much more picturesque and made up for the hard work of the previous two days. Just outside Penistone we had to choose between the Dove Valley Trail and the Timberland Trail – we chose the latter as I was told it was flatter and the map showed that more was on road – we had reached the point where quiet roads were much preferable to rough tracks. We cycled along the River Don with a blackbird chorus, with the sun shining all day. We again had the odd diversion and arrived in Selby after 64 miles and 9 hours. We arrived at our B&B, the Hazeldene, to find that we weren’t booked in as we had not confirmed. However the B&B owner, Susan Smith, found us a room. We would both highly recommend this B&B as the room was excellent and the breakfast room delightful. We were now three-quarters of the way and we celebrated with an expensive Italian meal.

We cycled the final day of the TPT mainly on roads next to or close to the River Ouse that led into the River Humber. After 3 hours we had cycled 30 miles and expected to reach the Hull train station by 1pm after 40 miles to meet Dave Streets, who was to join us on the last section of the TPT out to Hornsea. However our pace slowed, we missed a sign and had to cycle back to the Humber Bridge to meet Dave and his son-in-law Dave. Easy now – I could call out Dave and get two heads turning! Young Dave led us out of Hull and onto the 15 mile old railway track to Hornsea. We arrived in Hornsea after cycling 62 miles in 9 hours to be photographed many times next to the TPT monument. The 2 Dave’s sped off back to Hull to collect Dave’s daughter and young Dave’s wife Gill to return back to Hornsea for a celebratory dinner.

Until now the weather had been perfect, not too hot or cold and no wind, I was even cycling in a short sleeve shirt between Penistone and Selby. We awoke to rain and dressed up in all our waterproof togs. The ride back to Hull, trains back to Northallerton, and ride back home were largely uneventful – except for vast disappointment to find that our favourite cafe, Roots at East Rounton, was shut. At the Hull station we were asked to move our bikes to the bike area by one security man which we did. Then we were sitting enjoying our coffee when another security man came up to say that we must take the bags off our bikes – there were now 3 security men crowded around our bikes!

We cycled 236 miles on the TPT which is 21 miles more than the claimed mileage but we had a few unplanned diversions. Our total mileage, including getting to the start and returning was 310 miles. The signs on the route were actually very good – a remarkable number being maintained for such a long track with many required through towns such as Stockport and Hull. Just a few were misleading, and some so small you had to look very hard. We once cycled around a half a mile square using the signs before we realised we had ended back at the same point. We had to lift our cycles over barriers at times, very difficult with the heavy bags on the back!

On arrival home I felt very proud of our achievement – my second longest cycle trip after my 900 mile bike ride across France in 2004. Mark Beaument & Alastair Humphries watch out!