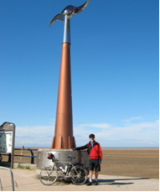 The golden sands of Southport glistened in the morning sunshine; miles and miles of sand. It was low-tide and the sea had retreated to the distant horizon. I decided to forgo the toe-dipping-in-the-sea ceremony and get on the trail. I headed for Formby and Liverpool. A southerly wind slowed my pace on the Cheshire Line and I appreciated the more sheltered Liverpool Loop with its bridges and cuttings. Once through the pretty village of Hale, the Mersey estuary opens up with the impressive Widnes Runcorn Bridge dominating the skyline. The Sankey (St Helen’s Canal) leads almost to Warrington; home turf. Now, no longer intent on spotting every blue trail sign, I picked up speed for home, shower and bed.

At the age of sixty-two, I had just begun my first cycle adventure.

A few years ago I turned to cycling as a method of keeping fit. My twenty-mile mountain bike circuit crossed the M60 using a suspension bridge until, one day, vandals stole a length of cable. I hounded the local authority and TPT office to reopen the bridge. When, eventually, it was repaired, they suggested I might be a volunteer ranger for the trail. This was when I became aware of the TPT’s full extent and the desire was birthed to cycle from west to east. 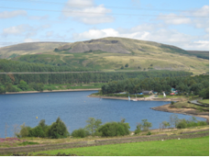 Surely, the most impressive ride of the western section must be the Longdendale Trail. Purple clad mountains, blue waters and green meadows bejewelled with abundant wild flowers make it cycling paradise. But, if this is heaven, hell is just ahead – the steep climb over Woodhead Pass!

Thankfully, it is soon over and aching legs can rest whilst speed quickly picks up on the long descent to Dunford Bridge and the well appointed Upper Don Trail. Just past Penistone, travellers heading east have a route choice; the northern Dove Valley Trail or to continue on the Upper Don for Wortley? Feeling slightly incongruous in sweaty cycle gear, I checked in at the stately Wortley Hall for the night, an experience which I highly recommend.

Refreshed and replenished with a generous full English breakfast, I turn eastwards along the Timberland Trail and Elsecar Greenway. This was the only section where I experienced some navigation problems which, taking the whole trail into account, is proud testament to all the staff and volunteers who maintain the signs. Well done.

At Sprotbrough the direction turns for North Yorkshire and the landscape changes too: river banks are exchanged for canal tow paths and bridleways for quiet metalled roads which frequently interact with the railway by means of level crossings; manned and unmanned. In Braithwaite a welcome sign greets walkers and cyclists alike offering tea and cake. A mug of Earl Grey, malt loaf and lots of trail news; thanks Nigel (who just by chance is a Vol Ranger too)! 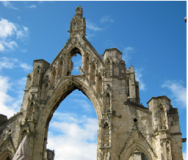 Selby Abbey and, later, Howden Minster are worth visiting for an architectural point of view. The Ouse lazily meanders through these flat lands and walkers only are invited to closely follow its course. Those with wheels need to keep to the roads but it is worth taking what opportunities there are to glimpse the river. On one such occasion, I spotted the feint outline of the Humber Bridge in the very far distance and felt re-energised knowing that I was nearing my destination. 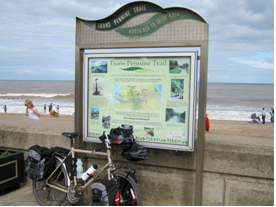 Hull is the TPT capital of the East with the little blue signs plastered all over the city. The art is to ensure that you are on track for Hornsea and not the docks! In truth, I found the Rail Trail a bit of an anti-climax after the beautiful scenery I had experienced since leaving Southport. Its high hedgerows afford little view and there are no spanning bridges or spires or steeples luring you onwards; just the desire to get out of the saddle for Hornsea’s fish and chipsYS – Paul Riley Hornsea or ice cream or both.

Refreshed by the local fare and satisfied to proudly pose for photos under the only other TPT terminus besides Southport, I returned along the Rail Trail to catch my train from Hull. My thoughts turned to my next cycle adventure. But, that will be another story.