I’ve been to Hull and back! 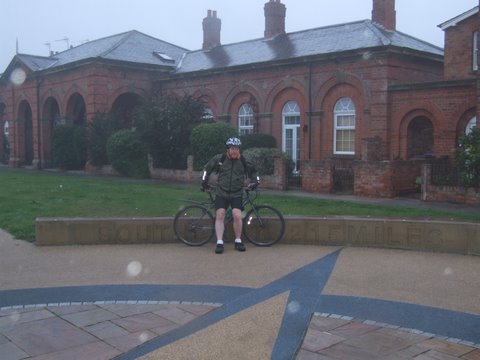 Following my ride over half the TPT last year (see The Fatman Cometh story) , I decided to do the whole East to West crossing this year and started serious training in April with a view to doing the ride in June to take advantage of the extra daylight.

An episode on the streets of Sheffield in May involving a dog, a bike, a graceful arc over my handlebars, a sudden deceleration and a crunch of bones led to an arm cast in a fetching shade of pink, two weeks using a mouse left-handedly and six week’s lost training, so I rescheduled it for early August.

I arrived at Hornsea on Wednesday 5th August after a lift from Hull station from John Wait, one of the Volunteer Rangers of the TPT. I cannot thank him enough for his help and the other offers of assistance in getting to Hornsea with a bike, elicited by my appeal for aid through the network of contacts established by Mandy Loach at the TPT office. It is a pity that the TPT is not accessible with a bike by public transport at the Eastern end.

I picked a stone out of the surf at Hornsea with the intention of hurling it into the sea at Southport in a symbolic gesture apropos of very little. This gesture was somewhat spoilt by the fact that tide had gone out past the Isle of Man by the time I got there!

Following a near fatal encounter with a steak and ale pie, a modest intake of IPA instead of EPO and half a good night’s sleep, I met up with John the next morning in the rain and, after a few photos, he accompanied me along the first 8 miles of the Trail at an easy pace before I went off into the wilderness on my own towards Hull. 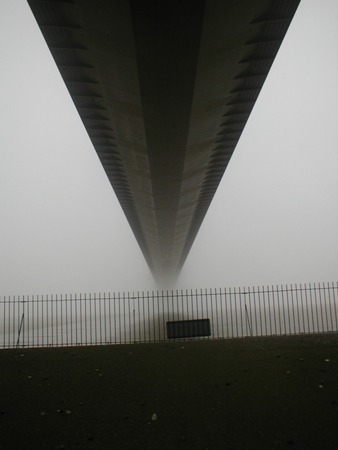 I reached the outskirts of Hull and immediately lost the Trail (I have a habit of doing so as demonstrated last year) so ended up following the ring road. Reasoning that even I couldn’t miss the Humber Bridge, I followed the signs and returned to the Trail at Hessle and stopped under the bridge for breakfast. You’d have thought that something that size would keep the rain off, and you’d be wrong. I checked in with my wife at home and she told me that the weather was glorious in Barnsley. I did a couple of cartwheels in delight at her good fortune, put the wet weather gear back on and trundled off into the murk!

I lost the Trail somewhere after Elloughton Hill (I have all the sense of direction of a compass in a magnet factory) and ended up off the TPT map to the north of the Trail. I saw a sign to Broomfleet and headed for it and so regained the route managing to stay on it for miles, gaining my first sight of the cooling towers that were to form part of my horizon for the next several hours, before arriving at the tidal barrage and sitting down for lunch.

The route round Selby was uneventful apart from the incredibly rough ride over the old airfield, until I mistook a TPT walking route for the bike one and went down about a mile of pavé before returning to the road. I tried, unsuccessfully, to find a pub that was interested in opening for business in the area south of Selby, got lost again when I missed the left turn sign in Gowdall (to be fair, when I eventually returned and had another go, it was nearly obscured by foliage) and then had a puncture. This was my own fault for having boasted that my Kevlar impregnated tyres could deal with most stuff on the road. They can, but not the piece of wire that went through my front tyre just north of Doncaster.

After fitting the spare tube I laboured on and lost my way again near Bolton upon Dearne. By now, I was suffering the effects of not hydrating properly through the day. I had taken on fluids, but obviously not enough. As a result, I was overheating and felt nauseous, so didn’t feel like eating, so my energy levels dropped, so I needed more fluid, which I couldn’t take on in sufficient quantity etc. Basically every mistake that you can make.

It was only the intervention of my MP3 player giving me (I swear this is true and more of this later) Peter Gabriel singing ‘Don’t give up’ as I passed the road to Bolton station for the third time, that stopped me from doing so and I carried on along the road to the Old Moor RSPB site.

I got back on the TPT just afterwards and finally arrived at the section with which I am most familiar with at the end of the Elsecar Greenway and called my wife to arrange a pick-up at Silkstone Common an hour later. It had been my original intention to get to Penistone, or Windle Edge, but this was impossible by now.

The long slog up to Silkstone nearly defeated me and I was literally on my last legs when I rolled into the station car park. I took on nearly a gallon of fluid over the course of the evening and, after a hearty plate of pasta retired to my bed.

Resuming my journey I found out on the first slope of the day (about 150 yards in) that the previous day’s efforts and the debilitating effect of dehydration had taken a lot out of my legs and I reckoned that I would be pushing the bike up more hills than I had anticipated. I was right too.

The overnight dousing (in some ancient civilisations I and my bike would be worshipped as bringers of rain) had reduced the uphill section before Dunford Bridge to the consistency of porridge and not much fun to ride through. I took a break at the bottom of Windle Edge and took stock. I was in ok shape (round is a shape!) but decided that I might not be able to make it to Southport, so resolved to set myself small goals, such as catching up with my progress on the same route last year, getting to somewhere on the Merseyrail network, reaching Aintree etc, and see how I was going each time I completed them.

I lumbered over the top at Windle reservoir and sped down the Woodhead Pass to the butty van, which I can heartily recommend, for refreshment. Carrying on down the road, I rejoined the Trail at Crowden and found that the surface was even worse than earlier. My gears were making a terrible noise but, after cleaning them out, it turned out to be my legs that were creaking! 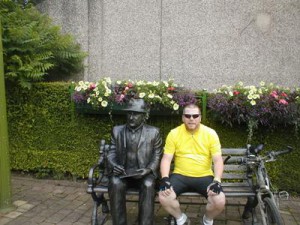 Remembering the enormous push up the hill at Broadbottom, I selected a different route and so returned to the A628 just before Mottram and pushed the bike up the hill to the statue of LS Lowry at the top (his legs were slightly more mobile than mine), then continued along past Hattersley and picked up the Trail to Stockport.

Stockport was as pleasant as I’d remembered it and I passed quickly through towards Didsbury. Several signs had been interfered with and, if I hadn’t known where I was going, I would have been as disoriented as Megan and her father a few days earlier (see ‘Megan and Martin’s bike ride’. Big round of applause to her for making the trip at that age and to Martin for actions above and beyond the call of Daddy duty!)

After lunch by the side of the Mersey I carried on and, recognising many places from my last trip, I smiled as I passed the sewage works at Dunham Massey where I’d got lost last time and then onto the section into Warrington, greatly improved by the new surface. The Lymm section was frustrating with its many A gates, but I made it to Warrington but then, falling foul of the temporary diversion, I ended up going round Warrington’s road system before rejoining at my old friend, the sewage works near Great Sankey.

I stopped at the Ferry Tavern to take on refreshment and reflected on whether the greatest pain was from my legs, nether regions or the England v Australia Test match I was listening to on my radio!

The last westward section along to Widnes passed uneventfully and, then I turned north for the run up to Speke and hit a headwind. Less than 10 mph but, by this time, a serious impediment. The sun was shining, the sky was blue and the glorious collection of rainbows of refracted light provided by the carpet of glass at the Speke underpass was a joy to behold! This area needs constant attention and without special tyres, must be a permanent hazard.

The open stone path on the first part of the Cheshire Lines path was literally a pain in the backside, and my legs were so far gone that I had to push the bike up the rise to cross the railway line near Ainsdale. It was at this point that the cricket commentary finished, so I was able to make the approach to Southport without distractions.

I have been working towards this challenge for several months and I have to admit to being quite emotional as I came along the road towards the marker post on the promenade.

I collapsed against the Seamark – Lance Armstrong has nothing to fear, but I was more than happy with completing the journey.

I sat down (gently) to write this account and, looking through my MP3 list, mused upon the fact that it shows my age and also the subconscious appropriateness of some of the titles that I got through during the ride :


I could not have done the trip without the help of John Wait for the transport, my family who put up with my absences to train, the TPT volunteer Rangers and council workers who keep the Trail in such good condition and last, but not least the makers of Lanacane!

I suffered severe sunburn on my legs and upper arms, the aforementioned dehydration and got lost on more occasions than I care to remember. All of these could have been avoided with a bit more care on my part, but are all part of the learning experience. I only mention them to give a warning about the benefits of planning to others who want to try the TPT. If somebody of my stature (see photos) can do it, then anybody with a reasonable level of fitness and adequate training can do it too

I am sure that there will be other opportunities to indulge in self-harm on the TPT. I will be back on the Trail soon, but not just yet, thank you!.