How to really test your Friendship 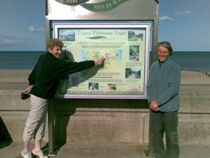 My friend Jackie and I had a brilliant week cycling the Trail (June 2008). It was great fun and not overly challenging.

In common with everyone else we spoke to we did have problems keeping on the Trail as the signage at times disappears; is strangely placed or can simply be very misleading. Speke and Hornsea are two good examples of this – when on both occasions we emerged correctly from one track of the Trail to be confronted with two more signs pointing in opposite directions, simply with the TPT name and logo on the signs, no indication of which was east and which was west. Having come from one direction we were surprised to be offered two choices, expecting only one on a linear trail?

We encountered many examples of dodgy signage over the week, which could be very frustrating at times and often lead to more mileage than necessary. Also beware of signs which are redirected, presumably for ‘a laugh’, one of these cost us about 10 miles extra cycling, but fortunately it was on our first day before our official start – when we were cycling from Liverpool to Southport for an overnight stay before setting off for real the following morning.

Also, another thing to be wary of; the Trail in Speke, takes you from an industrial estate, onto a housing estate, via a very frightening short tunnel (under a road), which at the time we were here was littered with broken glass, overturned supermarket trolleys and burnt out debris. As two ladies travelling alone we found this very intimidating, not least because it was followed not 5 minutes later by two small boys trying to throw stones at us across the road……is there no way this part of the Trail could not be re routed? And all this whilst we were trying to work out which way we should follow the trail, not a time we particularly wanted to stop and look at maps!

All that said, I wouldn’t have missed it for the world, there are lots of beautiful areas which make up for the not so enthralling back streets of the cities/towns. Woodhead Pass was worth the climb and surprisingly not as daunting a climb as I had envisaged. The Yorkshire villages were lovely, and the cycling was not demanding. One final word of advice when booking accommodation, it isn’t enough to ask can bikes be safely stowed, ask the proprietor where, one hotel expected us to jump down a sub basement, lower the bikes 6 foot down and then get them out again in the morning, for us this wasn’t even an option, so the bikes were tucked around a corner and chained together overnight, not an ideal situation. All that said, I wouldn’t have missed this week for the world, anyone thinking of doing it certainly should go for it.

To sum up this trip, the best part was sharing a fantastic experience with a great friend, the worse part….5 punctures in two days!

TPT Note – the problems reported by Diane were relayed to our partner TPT Contact Officers in the relevant Local Authorities for their action.