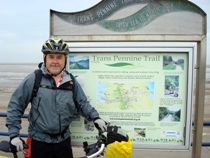 I have to admit I was worried at the start of my journey to completing the Trans Pennine Trail. As a Hong Kong resident I first planned to attempt the route in 2006, during my usual summer break in the UK. Echter, this all came to nothing when during a training ride on the Hull to Hornsea section I fell off the bike sustaining a broken wrist and a visit to Hull Royal Infirmary. In 2007 reported flooding on sections of the Trail thwarted my plans.

This year my main purpose for being in the UK was to attend my daughter&#8217;s graduation from University; my Wife had seen enough of my injuries and did not want them recorded in the graduation pictures, therefore I was banned from the bike until after the ceremony.

Day One: The morning of June 3rd arrived with a stiff breeze from the southwest and rain; so much for the predicted sunny conditions. Undeterred, and having taken the obligatory photograph at the start point, I set off from Southport under black skies with heavy rain falling. At least the wind was in approximately the right direction, pushing me along from the side. By Aintree the rain stopped, my morale improved and I made good progress to Halewood. Echter, the weather gods intervened again just before the Widnes Bridge with a thunderstorm interrupting this rather pleasant section along the Mersey. As I pressed on along the Sankey Canal, avoiding the fishermen and their rods, the rain eased and the sun shone again. Bliss.

Wilderspool, near Warrington, presented my first major route challenge. Essentially I got lost when presented with a number of options for the way ahead and some unclear signs. After a detour I re-established contact with the Trail with the help of a kind lady cyclist, who went out of her way to lead me back onto the Trail. She clearly took petty on me and for that I&#8217;m thankful.

I opted for Stockport as my first day&#8217;s destination, with a helpful taxi driver directing me to a motel for an excellent nights sleep. I was tired, but relatively fine by this stage.

Day Two: Day two promised sunshine and hot conditions, and for once the weatherman was correct. My departure from Stockport went off route for a while as I struggled to find the Trail. After doubling back for a short distance, I was back on the route and heading to Hadfield through the Tame Valley. Arriving in Hadfield I took a short break for a late breakfast in a &#8216;local café for local people.’

Suddenly it was over, as my parents greeted me at a deserted Hornsea finish point. I&#8217;d done it in three days covering a total distance of 221 mijlen, as measured by my GPS. I&#8217;d rode with a heart monitor that helped me calculate my total calorie burn at about 13,500. And guess what, no injuries except a sore bum!

With rain threatening again, I quickly packed up and loaded the bike on Dad&#8217;s car to head home for a lengthy soak in a hot bath and a well-deserved cold beer.

Some thoughts: My bike was a loaned Marin Muirwood 29er. The bike was well up to the job, although the slick urban tires did struggle in the wet and required careful handling in the mud. To be fair, the Trail was relatively dry despite the rain, although mud and puddles are to be expected in areas where the sun does not reach. None of the Trail is technical. In other words, it&#8217;s a relatively easy ride and a suspension bike is not a most although it would make things more comfortable on a few sections especially along the Humber bank. 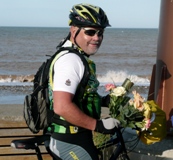 So do you have to be super fit to ride the coast to coast? Nee, is the simple answer. Although I consider myself to be a reasonably fit 48-year-old due, in part to my regular cycling in Hong Kong and China, in my view the Trans Pennine appears to be well within the reach of any rider with a bit of preparation. So get out there and enjoy!