Having lived in Warrington growing up, I’ve been aware of the Trans Pennine Trail since it opened in 2001. Completing the trail from Southport to Hornsea had been an ambition fourteen years in the making. I’d decided to cycle the trail solo over five days and raise money for Cancer Research UK in the process. This is my story.

Day One
It was a short train ride up from Liverpool to Southport. Unfortunately, the rain was hammering down and to make matters worse, one of the water bottles in my bag had exploded on the train up, soaking all my gear. Even still, I was optimistic for today; this was the section of the trial I’d trained on and so was hoping it would be quite an easy start. I picked up a stone that had swept in from the Irish Sea that I could carry across to the North Sea, stamped my card at the tourist office, and I was off.
The weather began to clear up and luckily the rain eased off, and wouldn’t be a bother again for the rest of the trip. I made great progress down the Cheshire Lines, but the luck ran out near Gateacre on the Liverpool Loop Line when I punctured my back tyre. I hadn’t punctured a tyre in over two years, so being a bit rusty it did take a considerable amount of time to get the tyre back on correctly.
After fixing the puncture, I carried on to the village of Hale to pick up another stamp, then through Pickerings Pasture, the St Helens Canal, then stopped off in Lymm to get a replacement inner tube, which conveniently was another stamping point. I had planned to finish the first day at the A6144, the furthest I’d previously been along the TPT, but made the decision to push on to Stockport. Sale Water Park was pretty impressive, and it was interesting to see the River Mersey through to its very beginning.
About two miles out from Stockport, I made a slight wrong turn where the path was intended to leave the Mersey. It was at this point that I realised my back tyre was slowly deflating again with another small puncture. Knowing the end was in sight, I pushed on, and followed the shrinking Mersey back into Stockport. I’d never been happier to see Stockport’s Co-Op Pyramid! I hopped on a train back to my parents’ house in Warrington to call it a day.

Day Two
Knowing I had only around 27 miles to do for the second day due to covering the extra distance between the A6144 and Stockport, I didn’t set off until 1pm, believing this would be a very easy day. The blistering midday heat was in stark contrast to yesterday’s rainy start. I picked up a stamp from the Tourist Information Office and started off towards Reddish Vale.
Two things became clear very quickly, which would mean this day would not be as quick and easy as first thought. Firstly, the trail’s gradual incline towards the Pennines began quite a bit earlier than I expected, and the majority of this day was spent going uphill to at least some degree. The second point was the difference with only a few signs on this section. I can happily report though, that this issue is only really confined to this particular section, and the rest of the trail is extremely well signposted. 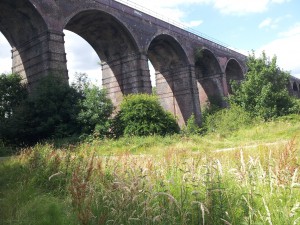 Reddish Vale was particularly picturesque, and I’m making a point to visit the country park again. There was a particularly great view of the viaducts that I only got to see because I’d lost the trail a bit. The village of Charlesworth was very nice too, a very steep hill to get there though and I did wonder how the residents coped with it every day. My other highlights of the day were seeing the reservoirs in Hadfield.
There was a lot of work around the Longendale Trail so there was a bit of a diversion to get to the Woodhead Tunnels, and my phone’s signal cut out at this point. The climb to the top wasn’t too bad considering. I missed the marker for the highest point, but then it was all too clear I’d passed it from the nice long path downhill to Dunford Bridge. 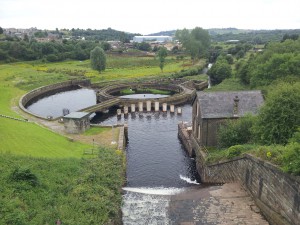 Not long after, I had to come off the Trail to get to my hotel for the night. Navigating the A616 and A628 uphill in Friday rush-hour traffic with lorries whizzing past was not at all pleasant. I would hugely recommend for anyone else to make sure you get a hotel closer to the Trail in this area. That said, the hotel was lovely, an Elizabethan country house that is rumoured to be haunted by ghosts from the moors.


Day Three
I woke up dreading the task of getting back to the Trail on the busy roads, but there was very little traffic at this time, so it was fine. The route was almost all slightly downhill, easy going, and with very nice green scenery to Barnsley. There was just one incident to puncture the enjoyable morning. Near Worsbrough, I suddenly had a sharp pain just below my neck. Confused, I quickly pulled over to see what had happened and realised I’d been stung by a Yorkshire wasp!
After the wasp palaver, I made it to the RSPB mid-point for a stamp. There was an American tourist outside excitedly taking pictures with a DSLR of an extremely ordinary pigeon. I felt the excitement would kill him if he were to visit Liverpool.
It was not long before I was following the River Don near Doncaster. This was another one of my particularly favourite areas on the Trail for the great views. I managed to get a third puncture near Bentley, but by this time I’d become a seasoned pro at changing inner tubes and was back up and running in no time.
Braithwaite was the final stop for the day. I stopped up for a drink and another stamp in the Threeways Cafe. I was really impressed by the owner who had converted his shed into what can only really be described as a shrine to the TPT. Definitely worth a visit! From here it was a short way back to my hotel in Barnby Dun. A really pleasant day, and much faster progress than the previous one.

Day Four
My plan for the day was to get as far as Saltmarshe to get a train to a hotel in Thorne, however, when I went to double check the train times I realised that there were no trains running on a Sunday! A few calls to my girlfriend back in Liverpool, and I managed to change to a hotel in Welton. This meant quite a few extra miles had to be done, and more worryingly I realised there would be no bike shops open on a Sunday and I was down to my last replacement inner tube, and my gear alignment was a little out after the last few days. In a bit of a panic I skipped breakfast and set off, praying for no punctures and a day of signposts more akin to Day 1 and 3 than Day 2. 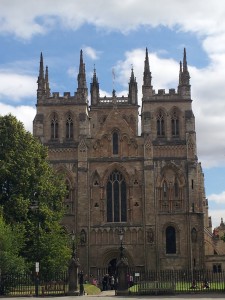 As it turned out, I would make great progress. There was only one slight wrong turn near Snaith where some barks from an over-zealous farm dog where a clear indication I needed to turn back. Passing through a disused airfield, it wasn’t long before I was up in Selby with its magnificent Abbey. Then it was on past Barmby on the Marsh, and through a series of small villages. This section is technically mostly on roads, but it isn’t really anything to worry about for Trail users unconfident on roads as they are mostly traffic free with the odd tractor trundling past every few minutes.
In Blacktoft, I noticed an old village hall that claimed to be a stamping point. Opening the door, and calling “hello?” I realised that the building was intended to be ‘self-service’. You could help yourself to tea and coffee and stamp your own card. There were also bric a brac items and miscellaneous books available in exchange for donations. A really nice idea, and very warming to think that the community has such a high level of trust. 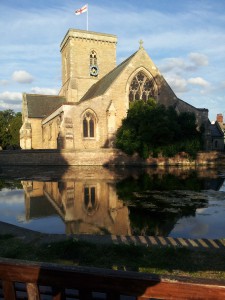 A little further and I caught the first glimpse of the Humber Bridge in the distance, and before I knew it I’d arrived in Welton in record time. The hotel I’d hastily booked was the Green Dragon, which also happened to be a stamping point. This was another hotel steeped in history, and is allegedly where the infamous highwayman was arrested. Welton itself was definitely one of the best places I visited on the Trail, and was extremely beautiful and unspoiled.

Day Five
I started the final day in good spirits knowing that it wasn’t much further to the end. It wasn’t much further to North Ferriby, where you can follow the Humber along to the Humber Bridge with spectacular views. It then was just a short ride up to Hull City Centre. Hull had some really incredible architecture, but definitely seemed like it had seen better days. I really hope the forthcoming City Of Culture status brings with it some investment, in the same way it did to help regenerate Liverpool. 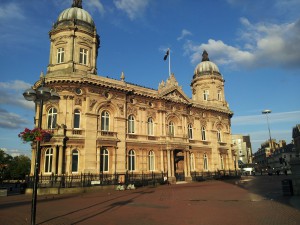 I picked up my penultimate stamp from Hull’s Tourist Information Office and made for the final hurdle in the adventure. The old railway path up to Hornsea was a nice way to finish the adventure, and was essentially a straight line all the way up. Arriving at Hornsea was really exciting, and there was great feeling of accomplishment. I threw the stone into the North Sea, and went to the museum to pick up my final stamp.
It only took an hour to cycle back to Hull despite the wind being against me, so I had time for a couple of celebratory drinks before my train home. Overall it had been a fantastic experience, and I’ve raised (to date) over £200 for Cancer Research UK. 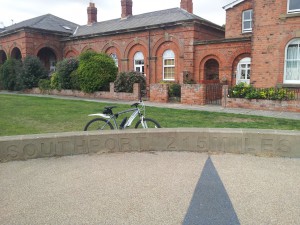 Advice
• Definitely take more than enough spare inner tubes
• Leave yourself enough time around the Stockport at the minute (understand this will get easier soon)
• Train enough beforehand. I’d been cycling around 100 miles a week in the months leading up to this, and it makes it a lot more pleasurable if you’re not exhausted the whole time
• In hindsight, 4 days probably would have been sufficient to complete the Ttrail. If you’re in reasonably good health then 4 days shouldn’t be an issue.
• The TPT is really good for skipping out any really busy roads. Make sure you don’t introduce any when you’re planning your hotels.