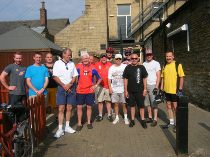 The 2010 World Cup in South Africa and Wimbledon made a nice sporty backdrop for our group of (8) Scousers and (4) Czechs from Prague as we made our assault on the Tran Pennine from LEEDS back to LIVERPOOL.

After a Team photo session (big cheesy smiles) we depart proper at 9.00am. The weather is glorious and so is the trail, ‘High Noon’ sees us at our pit stop at WALTON Social club. (approx 19 miles). Many thanks to Mandy for making us so welcome, and to the guys on the committee for their hospitality.

We turn up from there into CHINATOWN in LIVERPOOL and finish our journey beneath the magnificent Shanghai gates there at 2.05pm (35 miles). Champagne in plastic cups and a frantic photo shoot made the scene look more like ‘Formula 1’ than old guys cycling. The bikes are volleyed into the back of the van, John is away. 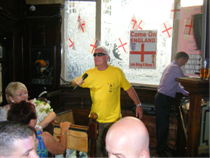 The (4) Czech guys have a lovely country too, but they were astounded at what they had witnessed.