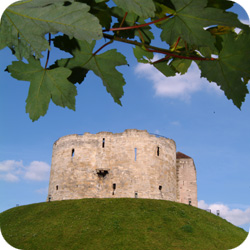 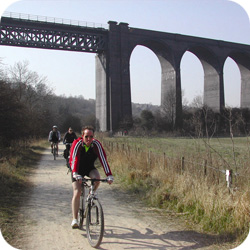 From Harlington the Trail follows the River Dearne to Conisbrough and then along the Don Gorge to Sprotbrough (ca. 5 Meilen) and then continues along the old railway to Bentley (eine weitere 3 1/2 Meilen).

Zugang: There is parking at Pastures Road and at the former Earth Centre site off the A6023, as well as by the river at Sprotbrough. The trail can also be accessed from Conisbrough station (by the Earth Centre) and Bentley station.

Anlagen: There is a pub at Sprotbrough and local shops and pubs in Bentley. 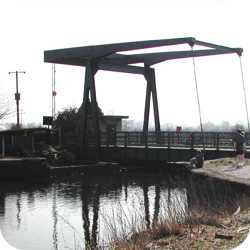 Zugang: There is parking at beside the canal at Braithwaite and Sykehouse. Turn off the A19 at Askern, following signs for Moss and then either village.

Anlagen: The nearest local facilities are in Fishlake (pub and shops) approximately 2 miles east of the canal and a pub at Sykehouse. 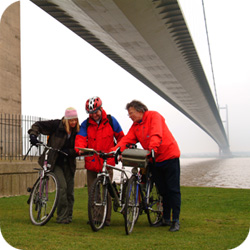 A short section that takes you along the foreshore and under the impressive Humber Bridge (ca. 2 Meilen). This can be linked in with a trip around the Humber Bridge Country Park.

Zugang: There is parking in the Humber Bridge Country Park (signed off the A63 and A164) or beneath the bridge (follow signs for the viewpoint). The Trail can also be accessed from Ferriby and Hessle stations.

Anlagen: There are toilets and refreshments available in the Country Park car park and a pub on the foreshore, plus local services in North Ferriby. 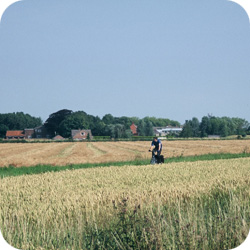 Follow the old railway from Hull to the eastern terminus of the trail on the seawall at Hornsea (ca. 15 Meilen). There are several car parks along the way to give shorter options (note there are a couple of busy roads to cross on the way).

Zugang: There is ample parking in Hornsea and Hull. Along the route there is parking at Swine village (off the A165), on the A165 south of Skirlaugh, and at New Ellerby

Anlagen: There are all the facilities you would expect in the seaside resort of Hornsea. 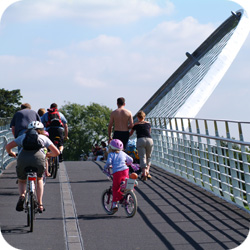 Bring your bike, and cycle at 10 times the speed of light through the Solar System! Pass Pluto just north of Riccall and follow the old East Coast main line railway to find the Sun just north of Bishopthorpe (6 Meilen) you can then continue on purpose built tracks to the Millennium Bridge in York (eine weitere 3 Meilen). Note there is a short – 200m – section on housing estate roads in Bishopthorpe. For more information on the cycling the Solar System visit www.solar.york.ac.uk. For a longer ride it is possible to start in Selby, which involves some quiet roads in Barlby and Ricall, and a busier section in Selby (which could be walked with young children).

Zugang: The route runs parallel to the A19 between Selby and York. There is parking on the route near Escrick, in Selby and in York at the Rowntree Park car park (less than 1/2 mile north of the Millennium Bridge). It is also possible to link this route to York and Selby rail stations.

Anlagen: There are facilities in the centre of York, also at Rowntree Park and in Selby, plus pubs and shops in Riccall and Bishopthorpe.