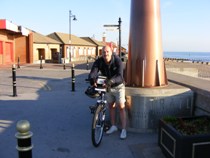 Yesterday (15th September 2009) I completed the Trans Pennine Trail from Hornsea to Southport by bike.

I made the decision to make this trip only three weeks ago, in reaction to the news that a close friend has cancer, which began as breast cancer but has now spread through her body to the point where there is no more the hospital can do to help her. I felt the need to do something…anything, and cycling the TPT in support of Breast Cancer Campaign seemed appropriate. I hadn’t ridden a bike in earnest for over ten years, in fact when I decided to do this ride, I didn’t own a bike. So I bought a ‘Schwinn Frontier’ off e-Bay, and sent off for my TPT maps. A three hour ride on the Woodhead section of the Trail last weekend was the sum total of my training.

Saturday 12th September 2009: Having been offered a lift to my start point, I arrived at the Seamark in Hornsea at just before 8am. After a couple of photos I watched my lift drive away and I went off in search of The Marine Hotel to get my card stamped for the first time (Tourist Information was closed).

The first 14 or 15 miles into Hull was an absolute joy. The weather was great and the scenery was lovely. Hull was not so lovely…. On leaving the Trail and crossing the busy main roads I had my first set-back. My brand new, top-of-the-range, Topeak wedge bag containing two spare inner tubes and a puncture repair kit, which was fitted under my saddle sheared through on the clip when I bumped down a low kerb. I had no option but to hang the bag from my handlebars, where it remained, unused for the whole trip. At this point, the speedo on my cycle computer began reading 75mph, I wish!

I arrived at ‘The Deep’ for my second stamp, but had to wait outside until they opened at 10am. Trying to regain the Trail from Hull proved too much for my navigational skills and at 11am I was still going around in frustrating circles on busy roundabouts and carriageways, unable to pick up the TPT signs. In desperation I took the thundering A63 towards Hessle, in the hope that I could pick up the Trail there. This was not to be, so I took a minor road for North Ferriby. Alas, the TPT map bears no resemblance to the new road system in North Ferriby. So it was not until I reached Welton that I was able to rejoin the Trail. It had taken me two and a half stressful hours to cover the 11 miles from Hull.

From Brantingham the signage became very good and I was able to carry on through Ellerker, Broomfleet and Blacktoft, and on to Howden where I stopped for a sit down and replenish my water bottle. Howden is a lovely little town that requires further exploration in the future, but right now I had other places to be, so on through Hemingbrough and into Selby, where I decided to spend the night. Hoping to get my card stamped for a third time, I spent some time riding around Selby. The Visitor Centre was closed, and the alternative stamping point, The Royal Oak, is now a night club called The Riverside. It was closed also. At this point I had covered only 56 miles of the Trail, although my odometer told my I had cycled 88 miles in the day. Note to self… don’t get lost again! I booked in for the night at The Londesborough at 7.15pm and went in search of pasta!