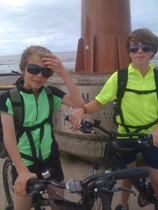 We live near the trail in East Yorkshire and started by cycling the 10 miles from home into Hull to catch the train to Southport. We travelled light with rucksacks and two panniers containing clothes, tools and provisions and had pre-booked our accommodation so we had a definite schedule of where we needed to be when. The train journey had been a concern as First Trains policy would only book 2 bikes on and Northern Trains (for the second part of the journey) would reserve none. As it turned out, the trains were quiet and the guards very helpful so we had no problems.

Arriving in Southport mid afternoon, our plan was to break ourselves in which we did with a ride of some 20 miles to our first accommodation at West Derby’s Premier Inn. The trail left the roads of Southport and followed the pleasant and gentle Cheshire Lines Path before reaching Liverpool – a few busy roads to cross – and then onto West Derby. 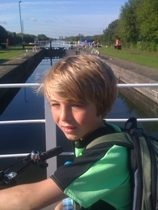 A good breakfast and day 2 was scheduled to be 50 miles onto Hyde. We really got into our stride and enjoyed the variety of scenery which is in parts industrial old and modern and part countryside with lots of variety; rivers, canals, nature reserves, tracks. There is a great feeling of the industrial history of this area and that it is still being made as we passed through. Signposts for the trail are generally excellent although in some places have been tampered with and turned but in conjunction with the TPT maps we had little trouble finding our way. The stepped walkway was quite difficult to negotiate through the barriers and we got lost in Didsbury briefly due to the diversion (could do with a sign onto a track from the road). Starting to get a feel for the hills now we reached Hyde after 9 hours in the saddle and a great feeling of achievement. 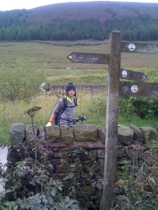 I was impressed with my sons’ spirit but for our 3rd day we needed to do 70 miles, which we’d never done before, and that over hilly terrain (and we come from East Yorkshire so not much experience there!) I decided that we needed to reduce the pressure by allowing plenty of time so we got up at 6 and had breakfast in the saddle (doughnuts). On a bike you just eat up the miles and there was a sense of anticipation that this would be the best day, great scenery and a host of interesting features; The Woodhead Tunnel, the highest point of the Trail, steep hills to descend. The Upper Don Trail was fantastic and fast leading us on to the lovely Dove Valley Trail. At Silkstone Common we traced a link to my past where the boys Grandma used to help at the family bakery (which distant relations still own) and enjoyed a really good ham salad roll. The day continued to enthral us and spur us on; the Dearne Valley Trail was also magnificent and we reached Barnby Dunn for our last overnight stay after a fabulous 12 hour ride. 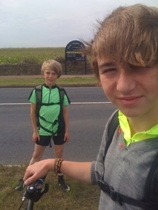 The last day would also be 70 miles and we were still in good shape thanks mainly to the gel seat covers and shorts we had invested in. The weather, which had until now been warm though overcast (ideal really) threatened hot sunshine and we put sun cream on. There was a lot of road cycling through the quiet back roads skirting The Ouse and The Humber interspersed with the odd trail. This, if not as exciting, was gentle and peaceful though at times it felt like a case of finishing off the job probably due to the heat, cumulative tiredness of the previous days and maybe a sense of disappointment that it would be soon over. Lunch at the pretty town of Howden was welcome but we still had a good way to go and we ticked off the villages as the names became more familiar to us. When we could see the Humber Bridge, this spurred us on. At Hull, a phone call home to give an estimated time of arrival so that mum and new baby Frankie could meet us and we raced up the very familiar Hornsea Rail Trail to end another long but fantastic day with fish and chips by the sea.

Huge thanks to all those who manage the TPT – we will never forget our most excellent adventure!

Dad says – The weather was perfect for us, which helped enormously, any wind was behind us and we only had a couple of hours of rain – I carried 6 spare inner tubes and we didn’t need any!