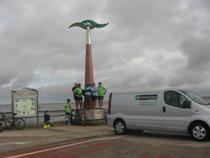 With the team assembled and the charity chosen, we set out to complete the Trans Pennine Trail in 3 days. James McSweeney, Caleb Chikatimeli, Chris Brown, Chris Chaplin, Tony Ensor, and Phil Renouprez, all working for Aviva and based in Stretford and raising money for The Royal Manchester Children’s Hospital.

Day one. Some by train and some by van we all met up at Southport train station and made our way to the start beacon at the sea front. Setting off shortly after 8am the weather wasn’t great but looked like it would hold off. Most of us knew this section well and we made quick work down the coast road and onto the path through the fields towards Aintree. Passed Aintree we made a stop at Speke and then off down through the streets to pick up the airport road and a few miles later back off the road and onto the trail towards the Runcorn/Widness Bridge. From there it was along the canals to the wall and then back on an old railway to Lymm, stopping in Lymm to hire a bike as one was totally inadequate for the trail, frame too small and energy sapping suspension front and rear. After another small stop there, it was on through Stretford, and sale, to the last stop of the day just near Didsbury, a quick hop off the trail to go to a Tesco in Parrs Wood then back on the trail through Redish Vale and the first part of the climb up the Pennines. From Stockport it was on through Broadbottom with some of us starting to tire, but on to our finish point, the start of the reservoirs in Hadfield, a total of around 85 miles for the day, with 5 punctures and one complete bike change, and a well earned rest in a premier inn just out of Hyde.

Day Two. The steepest of the days, and for us the worst of the weather, low cloud, rain, and high winds. It didn’t stop us! Meeting at Hadfield train station we made our way the start of the longendale trail along the reservoirs and onto the Woodhead pass. The weather made getting over the pass hard work, however we all made it, and then wind gave us a boost of speeds of over 30mph on the way back down the other side to pick up the railway line that would take us into Penistone, with three of us running about 15 mins ahead it worked out perfectly for our planned stop in Penistone. We found a place to get food, ate, and then directed the others there for a quick turn around to save us being out and stood still in the cold and rain too long. Making sure we didn’t miss our turning at Oxspring we took the north route around Barnsley and onto Doncaster. By this stage the wet weather and the entire off road sections had transformed us all into very muddy, wet, and cold cyclist who just wanted to get to the second day finish point in Hatfield. Once past Doncaster we realised Hatfield is a actually a few miles off the trail and so we continued following the trail until the weather broke just in time for us to stumble across a cyclist rest cafe on willow bridge lane in Braithwaite. The three up front found this the best place to stop, call the van to get us to Hatfield, and let the guys following know that day two was done and we’d found pretty much the best place to stop and make a start on day three

Day Three. Back at the cafe in Braithwaite we had some food and spent the time in some sunny weather to make some necessary, and in Chris Chaplin’s case, some unnecessary bike adjustments, as they had taken a hammering over the last two days. Setting off from Braithwaite we followed a lot of road section until we picked what I think was a section of the Aire and Calder navigation, a straight section of canal that set us on our way to Selby. Off the canal and back on to winding country roads with a never ending view of Drax power station that just seemed to never get any closer. Into Selby and a definite turn east toward Hull and more easy going country road into Howden and a stop off for food and drink. From Howden we started to see the Humber Bridge and got ourselves to Hessle, with good weather and needing to check our maps, we made or short stop there too and set off for the bridge. We took the low tide route and passed clean under the bridge, a massive sense of achievement and a sign we didn’t have far to go. Shortly after that we got lost for the last time as we made our way out of Hull and up through the Bransholme area. From there it was finally back onto an old railway bed and the final 11 miles onto Hornsea. In the best weather on the trip we all got to the seafront at Hornsea, and the familiar beacon we saw at Southport, shortly after 18:00 on the 17th July 2010. A beer and beach celebration and fish and chips for tea and we had done it, around 217 miles in 3 days. 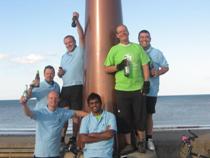 Along the way we had the use of camera from Dublin university. The camera was mounted to my bike and took a picture every 30 seconds, or when it sensed a change in environment. The camera took over 5500 images from Southport to Hornsea, and although not good in places due to the weather, it has recorded our trip across the length of the trail from Southport to Hornsea. The videos made from the images are on these two links, where they have been uploaded to YouTube.