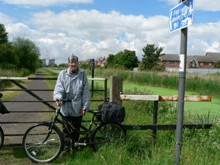 Saturday 2nd June Doncaster to York – (a great bike ride to York our average went up from 5 a 7 miles an hour. 3rd and 4th in York.