Op Garstang Gemeenschap Academy hebben we een lange geschiedenis van het Jaar 10 summer charity challenges. We have had heads with sufficient confidence in their staff to allow us to take students on LEJOG’s, biking the 3 Peaks, cycling to and climbing Ben Nevis, mountain biking the South Downs Way, and this year, we hope we became the first school to ride the C2C route of the Trans Pennine Trail for The North West Air Ambulance and Help for Heroes, 2 charities chosen by the students who rode. 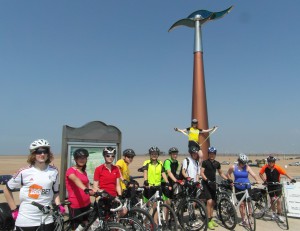 The trip was a great success, with the riders performing like a well-oiled machine along the narrow cycle paths, peddling along like determined shoal of salmon heading up stream to their destination. With hot blue skies above they were delighted that their first stop before the start at Southport was Tootsies,  an excellent ice cream shop, though nobody dared to try the ‘rocky road’ least it be tempting fate. The first two days of weather were incredibly hot, with most of the riders sporting white upper thighs protected by cycling shorts and dirty black legs and faces that had been exposed to the enormous amount of dust found on the trail. At one point, the whole group disappeared into a dust storm worthy of 1930’s America. Never has Bart Simpson’s famous cry of ‘Eat my dirt!’ been so appropriate.

Dag 2 proved to be the hardest and most testing, partly because of the extremely hot weather, but also because the planned 64 miles turned into 72, the last 15 of which brought the group within 5 miles of the top of the Pennines and the Woodhead Pass. At Crowden Youth Hostel, we were assaulted on all sides by midges, not helpful when you are tired after an epic day in the saddle, but sleep eventually came, and Day 3 dawned much cooler, with a welcome fresh wind in the riders’ faces.

A disused railway line led the group to the last few miles of climbing, and a short walk to the top of the Woodhead pass brought us to the summit and a good childish giggle at the local road signs. After this it was almost all downhill, following the river valleys of the Don, de Dearne, the Dove and eventually the Humber. We spent our most luxurious night of the trip in the Premier Inn at Goole before the shortest day of 50 miles to the end of the Trail. A couple of tyres blew, we fixed surprisingly few punctures, laughed at the notice by 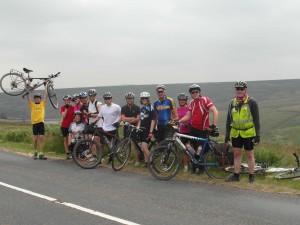 the Pennine Trail sign that said ‘No cycling’, gave way to horses, dogs and pedestrians, and flowed through gates and fences like an irresistible flood. Some people got their faces stamped at Blacktoft , and the generous members of a church in Swanland opened up for us as a ‘convenience’ stop for lunch. De laatste 13 miles from Hull up a disused railway line once again gave us the chance to fly to the end of the route. We had planned to be there for 5 pm, and were 15 minutes early.

After a trip of 246 mijlen, the team were still singing songs from the recent ‘We Will Rock You’ show at school, a fact that is credit to their effort and enthusiasm. They are now hoping to raise over £3,000 for charity, and if they are as successful money raisers as they were C2C riders, then it should be remarkably easy job. 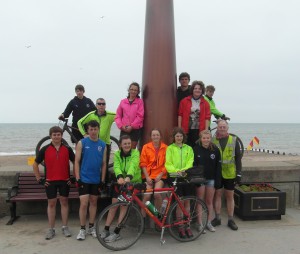 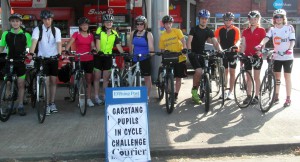