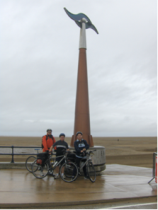 Having two of us already completed the C2C Cycle ride we decided it was time to do the Trans Pennine Trail. It was decided we could do this over three days as 70ish miles a day. We figured that we could easily ride an average of 10mph for a day.

So that was it. We took up the challenge on 7th, 8th and 9th July. Accommodation was booked for the two nights. The Buxton Inn just outside Hyde for the first night, and The Royal Oak Inn Hotel at Hirst Courtney for the second night. This split the trip into 3 sections of around 70 miles a day.

Day 1 Wednesday 7th July – We woke up around 4am, loaded all the bikes and gear into the car and set off for Southport. Upon arriving in Southport around 7:15am it was wet and cold. We unloaded the bikes and prepared ourselves for the day ahead. After a few photos we said good bye to the driver(my Mum) and the 3 of us( My dad Nigel, My brother in law Steve, and myself Dave) set out on our adventure.

After around the first 5 miles or so the rain had stopped and I was getting hot. We had to stop and remove our jackets. We pressed on and reached Aintree after around an hour or so. After a quick drink at the top of Wally’s Steps we decided to press on to Halewood Park where we would stop for a drink and something to eat. On arriving at Halewood the visitors centre was CLOSED!!! Out came the sandwiches and chocolate we had packed. A nice 20min stop was just what was needed. 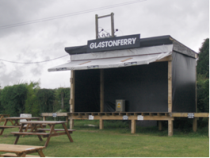 Once all refreshed and ready to go we were on our way again heading towards the River Mersey and Widnes. After what seemed like a very very quick ride along the Sankey Canal we arrived at Fiddlers Ferry and came across something we found quite amusing… Glaston Ferry – It looks a lot busier then GlastonBury (Not)

We then found ourselves at Penketh and stopped at Morrison’s to fill up on drinks, snacks and chocolate. It was at this point we realised we had already ridden around 36miles and it was only around half 12.

After some food and drink it was time to get back on the bikes to ride the remaining 35ish miles of the day. It seemed a long afternoon riding towards Stretford and Sale. We could see the Trafford Centre in the distance and it struck me just how far we have actually ridden. The only hitch we came across in the afternoon was when my Dad fell off his bike approaching one of the very annoying ‘A’ frame gates hiding around a corner. After a little first aid and a lot of laughing by me it was getting towards late afternoon and I was beginning to wonder if we would make it to the hotel that day. We pressed on through Didsbury (following a diversion route) and then on through Stockport. I was very happy at this point as it was around 4pm – 4:30pm and I estimated around 7 miles to the hotel. These seven miles was the toughest 7 miles of the day. It was the start of the Pennine climb through wooded sections, trail and finally road section. We arrived at The Buxton Inn at 5:30pm ready for a hot shower, some food and a well deserved pint. 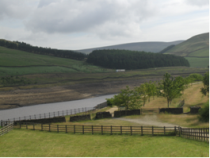 Day 2 Thursday 8th July – The hotel didn’t provide breakfast but we had been to a Tesco express opposite to stock up and cereal bars, drinks and chocolate etc etc. We set off around 7:45am along the A560 to pick up the TPT route again. After around 8 miles or so of riding through villages and trails we arrived at the Longdendale Trail running along 5 reservoirs. I have never seen reservoirs so empty in my life.

I never imagined Woodhead Pass would be a steep as it was. I have driven down the road before and often wondered what the steep tracks were for. Now I Know. We all pushed our bikes up here. I even think the most hardened of off road cyclists would struggle riding up here. Once at the top it was quite a flat ride along and then back across the A628 a couple of times. Then there is a very short steep climb on road to the highest point on the TPT. This part was ridden up. Once at the top there was a nice 2mile free wheeling section into Dunford Bridge. (If Woodhead Tunnel was open it would have brought us out here)