…and, to continue the pattern, the youngest in the group was just 8 years old.

Three of us – me and two boys, then aged 10 and 12 – had cycled the TPT from Southport to Hornsea in 2015 (you can read about that trip here). And when I found out my brother-in-law had been doing 30-mile bike rides with his two boys, aged 8 and 10, it seemed logical to suggest another TPT adventure – this time as a group of six. 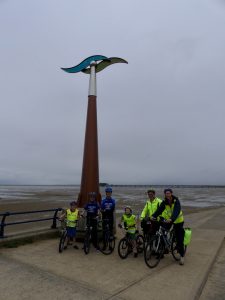 But could an 8-year-old really complete the TPT on a bike? The website said the youngest person ever to complete the TPT coast-to-coast was 9, so our 8-year-old could become the youngest person ever to cycle the route – quite an ask! And how would the logistics work out? I live in Bolton and my brother-in-law lives in York, so we might be able to stay with each other for some nights – but how would we get 6 of us, plus bikes, to our beds each evening…?

We needed a plan – in fact, we probably needed someone with a PhD in Logistics. We didn’t have one of those, so one Sunday in June we all met up and tried our best to thrash it all out. Plans were laid, spreadsheets completed, some accommodation booked, other halves consulted… and that was it: there was no getting out of it now!

And so it was that on Tuesday 14th August we got the train from Bolton to Southport and began the adventure. We’d aimed to get as far as Penketh on the first day, but after a wrong turn in Aintree and a fall just outside a very smelly industrial plant in Runcorn, we feared the worst. Fortunately a plaster was all the 13-year-old’s injuries needed, and we were able to beat our target and get to Warrington, from where two cars took us all back for a family meal in Bolton. 46 miles was a longest-ever bike ride for several members of the party! 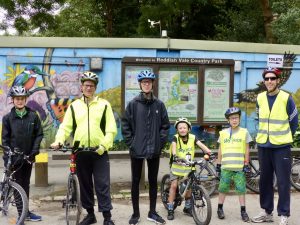 Work commitments meant we only had the afternoon on Wednesday, but that was still time to complete almost 30 miles from Warrington to Reddish Vale – although again, that was beyond where we’d planned, as we’d only anticipated getting to Stockport.

Thursday was always going to be a rest day (as a teacher, I had to be in school for ‘A’-level Results Day) – but anyway, we all needed some down-time to prepare for Friday’s Big Climb. With overnight accommodation booked for all of us in Penistone on the Friday evening, we knew we had to get up the Pennines in one day… 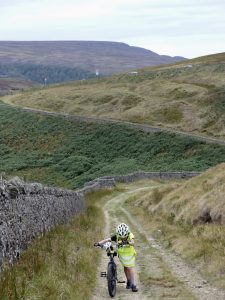 One thing that worked in our favour is that we allowed plenty of time for the climb. Nearly all of us had to push our bikes into Charlesworth, and frequent stops for jelly babies and other snacks meant our average speed for the whole day was only around 6mph. At one point we took 2 hours to cover 7 miles…! But after a veritable snack-fest at the summit our speed increased; we not only made it to Penistone (almost 3,000 feet of climbing from Reddish), we even had some energy left to take us onto Silkstone Common (and get the train back to the bed-and-breakfast we’d booked).

After a hearty pub supper on Friday evening (and a good night’s sleep), the plan on Saturday was to get to Snaith. Helped by the downhill gradient we made an excellent start, though progress slowed later on thanks to the level-crossing at Bentley (does anyone ever get through there without a delay?), and our first puncture a few miles north from there. Fortunately, my brother-in-law is a mechanical genius (which is a good job, as I don’t really know one end of a spanner from another) and was able to sort it out quickly – whilst I updated our families through social media. Again, we were able to get beyond Snaith, eventually being picked up at Temple Hirst (another 40+-mile ride) for an overnight stop in York.

The wind was behind us once we got through Selby on the Sunday (the joys of a west-to-east trip!), and particularly after lunch we made good progress towards Hull (5 miles in less than half an-hour at one point – break-neck pace for us!). Whilst criss-crossing the A63 we met a family of four (Mum, Dad and two kids) who were clearly doing the TPT too. Judging from the loads they were carrying, they were a lot more professional than us! We learned that they were taking the whole summer holidays to go coast-to-coast, camping along the way – apparently, Dad was carrying 75kg on his back, and the younger of their two children was just 7 years old!

We’d aimed to get to Hessle but again had enough energy to try to push further now Hull was in our sights. That would have been 50 miles in one day! But then, disaster struck. We’d done a good job of avoiding bits of broken glass en route so far, but a smashed brown bottle in an estate 2 miles from the City centre was virtually invisible against the road, and two punctures resulted. Although our mechanical wizard fixed both, we called it a day there.

We met back at the same point on Monday morning and wove our way through Hull and up to Hornsea. Passing the camping family a few miles before the end meant that our 8-year-old would have the honour of being the TPT’s youngest finisher for a few minutes before their 7-year-old completed the route! But records didn’t matter as much as the warm welcome and congratulatory medals from G

randma and the rest of the family. After another hearty meal at a nearby pub we all dispersed home.

We didn’t want to put any pressure on the younger members of our party to complete the trip, but afterwards we thought it would be a good idea to set up a justgiving page so that people who were impressed with what we’d achieved could donate to one of our favourite charities. If you’d like to give to The Railway Children, a very deserving cause, the page can be found at https://www.justgiving.com/fundraising/websterboys

So what insights would I offer anyone thinking of doing the TPT with younger children?
• Firstly, some practical tips.
– West to east is easier – or at least, it was for us.
– Do it in the summer – we only had one heavy downpour, just outside Stockport – and the temperature and the wind made for generally very pleasant cycling.
– In fact, do it in August. Parts of the Western section in particular are a blackberry-lover’s paradise, and being able to stop for some fresh, ripe fruit on a regular basis certainly helped.
– Allow plenty of time. Few children I know can cycle quickly. But if they’ve got some tenacity about them, if they can show resilience and determination, quite a few can keep going for a number of hours.
– If you’re going from Penistone to Old Moor, it’s easier (ie flatter) through Tankersley (which we did three years ago) than it is through Silkstone Common.
– And on the subject of route advice, the cycle-path along the Humber is probably better (if only for the view) than the alternative by road.
– Beware of tree-roots north-east of Hull and broken glass west of it…!

• Chat to others along the way. We met a Sustrans fundraiser outside Didsbury who was so impressed an 8-year-old was doing the route he decided not to ask us for a donation! (We signed up to a direct debit online later though!). Whilst waiting at the level-crossing in
Bentley, we met a group of six friends, one of whom had cycled all the way from Southport to Penistone the previous day – impressive or what?! Another gentleman – somewhat older than me (and I’m 51) – completed the route at about the same time as us – he’d done it in 3½ days despite having been diagnosed with a degenerative condition. And there was the camping family too. We drew inspiration from each of their stories. 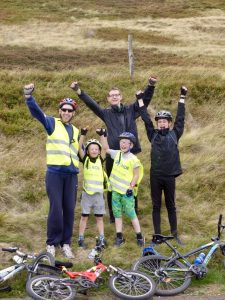 • Can the TPT be done with kids? Absolutely it can. Take your time, but it’s a fantastic ‘bonding’ opportunity – something your children will remember for the rest of their lives. The planning and route-finding, the stamping stations and certificates, the living (and practical) Geography lesson, the scenery, the outdoors, the exercise – they all make it an ideal activity for a week in the summer holidays. And what a story they’ll have to tell their friends when they get back to school – far more interesting than a week on a beach…!

• Finally, if we can do this, you can too. Really, you can. None of our group was particularly athletic – or even that fit. Cycling 40+ miles on flat roads sounds impressive but really isn’t that hard if you build up to it. All in all, the TPT is a glorious route through the heart of northern England. It really is worth doing with your children – so go on, what’s stopping you…?!